Taking the mill to the logs


After a 10 year break from sawmilling, New Zealander Neville Clarke is itching to get back into the game, and he’s got his eye on a Peterson Portable Sawmill. 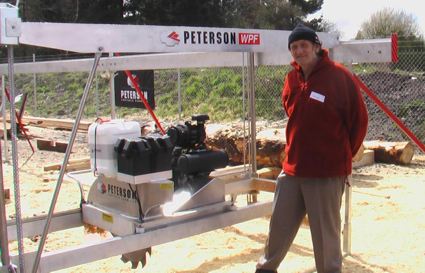 A table made by Neville Clarke from timber he milled himself.

Originally a builder, like his father and brothers, Neville Clarke started milling his own timber to build a house. He bought a Peterson 9” mill, one of the first to be built by Carl Peterson.

“The idea of getting a mill came from a guy down the road that had a sawmill, which wasn’t portable,” said Neville.

“Having a portable mill made more sense because I could get a few logs here and a few logs more there. It was easier to take the mill to the logs rather than getting the logs to the mill.”

Neville bought the Peterson mill because it was affordable, accurate and produced quality timber. “I liked the idea behind Carl’s mills, and so that’s why I got one,” he said.
In Neville’s mind, Peterson mills are excellent and he’s happy to recommend them to anyone. “Since I bought mine, I’ve probably sold five or six for Carl, to different people that have asked what they’re like and then they’ve gone off and bought one”.

Neville built a two-storey, 3000 sq ft house, all with locally sourced material. Now it’s done he’s thinking about getting another Peterson portable mill to make use of New Zealand native timbers he has from last century – matai, rimu, kaikitere and blue totara.

It’s obvious that timber is a big part of Neville’s life. He also makes furniture and is restoring an old wooden boat.

And the next mill Neville gets? “I’d like to go to one of those big production ones, but I don’t think going that far would be really worth it.

But I’ll probably start with a 6” because I’m selling my house and I want to build another one. We want to move from the west coast to the east coast.”