“I did it my way”: Sawmiller living his dream with timber 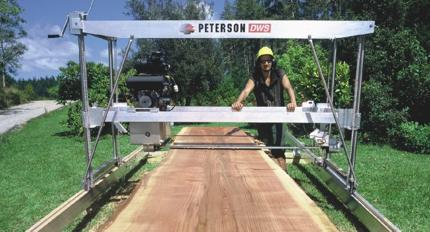 Robert Mansell, realising his dream: "Once you've finished milling and there's some beautiful timber there, it's a good advertisement and you get a feeling of satisfaction."

Versatile: The Peterson mill allows Robert Mansell to make a range of cuts from quarter sawing and backsawing, to doublecutting and slabbing.

Robert Mansell is a man living his dream. The Rotorua, NZ-based sawmiller has created an enviable lifestyle of doing exactly what he wants – and that is working with wood.

Robert has combined custom milling, landscaping, furniture crafting and house construction into one megabusiness. It is something he couldn’t have done without the versatility of his Peterson sawmill.

Combining the talents of the 8 in. Winch Production Frame (WPF) and a Dedicated Wide Slabber (DWS), Robert is able to mill timber to his own specifications, no longer being dictated to by the offerings of local timber stores. His Peterson allows him to make a range of cuts, from quarter sawing and backsawing, to doublecutting and slabbing. When it comes to building his own house, this is one of the greatest advantages of the Peterson.

“You don’t have to build a brick home like everyone else with your little strip of grass – you can build your own lifestyle, whether it is a rustic home or a log home. It’s the freedom of choice with the Peterson”, says Mansell.

Feeling that his creative side was being stifled when working for other people, Robert became frustrated and decided to embark on his own business in custom milling. Working with a range of species from macrocarpa to redwood, cyprus to natives, Robert found that word soon spread about his services.

Within two years of purchasing his mills, both machines were paid off and he found himself making a healthy profit.

Robert loves being able to create something from virtually nothing. Being able to enjoy watching a log be milled and fashioned into a beam for his new house, or a slab for someone’s new table is a rewarding experience for both him, and his customers.

“Once you’ve finished milling and there’s some beautiful timber there, it’s a good advertisement and you get a good feeling of satisfaction.”

“When I bought my own Peterson sawmill, I think it was the freedom of running my own business, being my own boss, and making my own choices that I wanted the most”

“When I bought my own Peterson sawmill, I think it was the freedom of running my own business, being my own boss, and making my own choices that I wanted the most,” Robert said.

He recognizes the value of Peterson’s portability, with his mill packing up onto a trailer that he can take into remote areas, directly to the log site. Working by himself, Robert can be milling within 20 minutes.
He also appreciates the standard of work that his Peterson produces.

“If I ever have an error, I know it’s not the machine’s fault – it’s mine,” he says. And in his business, Robert needs a mill that is efficient, accurate, reliable and gives a quality finish.

“It’s an awesome machine. For the price I paid, I’m getting a very well engineered machine. Every machine is good in it’s own right, but if you took it all on average the Peterson would beat most of them hands down.”

Peterson Portable Sawmills designs and manufactures top quality portable sawmills in New Zealand, and exports these mills to many countries around the world, as well as producing for the New Zealand market.

The first Peterson portable sawmill was conceived by Carl Peterson in 1977, while living deep in the jungle of the Fiji Islands. The design was the complete answer to all the problems he encountered there such as inaccessibility, extra large logs, lack of logging machinery, lack of capital and inexperienced manpower.

The first fully functioning prototype was shown in 1988 at the NZ National Field Days where it won the NZ Farmer Invention Award. The business was officially born in 1989, when the first sawmill was sold. That sawmill is still operating at Gisborne, NZ.