Renovator Glenn Marquette buys in his own logs and needs to double-cut large beams without turning the mill around, so he had to make a choice. 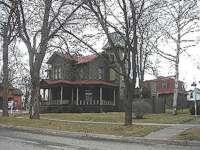 One of Glenn's earlier attempts at renovating. Not a bad effort!

Glenn Marquette loves wood, but enjoys it even more since he bought a machine he discovered on the other side of the world.

Working with timber for more than 20 years as a hobbyist woodworker and carpenter, Glenn often finds old houses and renovates them for resale. “I ran into it by accident, and I decided that I kinda liked it.”

He has completed dozens of houses, but Glenn found his first attempt was a steep learning curve.

With only an architectural degree behind him and no practical experience, Glenn says, “I didn’t know anything when I tackled my first house. I just bought some equipment and improvised.”

With each house he is honing his skills though, and is now producing some beautiful work.

Glenn reckoned it would be far more economical to buy the logs and mill them himself. He would have the advantage of milling timber to his own specifications, instead of relying on the limited range available in timber stores.

“It was an easy decision”

Glenn, based in Wisconsin, USA, was previously only aware of bandmills, but a chance conversation with a friend put Glenn onto circular saws, and in particular swingblade mills.

“I had one magazine and very little info, but at least it was a start. I knew there was something else out there.”

So, which swingblade? After researching the advantages of each of the sawmills, Glenn decided on Peterson’s 2005 model 10” Automated Swingblade Mill (ASM). There were numerous features that made it an easy decision.

Knowing that he would be predominantly working alone, Glenn needed a mill that would be the easiest for one man – and efficient. The first advantage of the Peterson machine was that it allowed Glenn to stand at one corner and control the whole operation. Time wouldn’t be wasted walking around the mill for vertical adjustments, or having to go mill-side to unload boards. 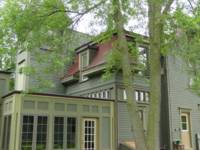 Another of Glenn's renovations.

“There was just something awkward about the other mills,” says Glenn. “There was a lot of goofing around and stuff that was not cutting time. The Peterson is similar, but it’s much better.”

Glenn needs to cut large beams, so he loved the ability to double cut without having to turn the mill around.

“Others try to play this down, saying it only takes a few minutes to turn their mill around. But it’s a big deal if you are cutting several beams. You’d be goofing around, every time shutting the mill down, unhooking and turning, reattaching and starting the mill back up.

“I believe in working smarter, not harder!” Another advantage is the ASM’s board remover that allows easy retrieval of boards from the log. Glenn can cut a board and bring it straight back to him, ready to stack, or for a two- or three-man operation the board remover also pushes boards out the tailing end.

“From what I had seen, the ASM was the best. It was the easiest and just looked like a lot less fatigue,” says Glenn.

So he made what turned out to be a “pretty easy decision”. Glenn travelled to New Zealand for training on the new purchase. “I knew the kiwis were top notch rugby players, that there were a lot of sheep, and that the land was mountainous. That’s about all I knew.”

Stay tuned to see how Glenn got a lot more than he bargained for on his two weeks in the land of the Long White Cloud.