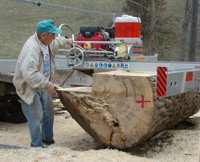 Wilbert Schuldt had a job on his hands, but at least he could laugh about it. A massive cottonwood log lay between the arms of his sawmill. “It was too big for Staggemeyer to buy, and I wish I hadn’t seen it too,” Schuldt said.

The tree had a diameter of 51 inches and was 10 feet long. Wilbert wasn’t about to tackle the whole job that Wednesday morning. But he sliced off three 8-inch boards for me in about two minutes.

First he fired up the 24 horsepower Honda engine, put the circular blade into its vertical position and walked it the length of the log. Then he flipped a lever to change the blade to a horizontal setting and retraced his steps. A beautiful board emerged from the top of the log. Wilbert tossed it on a hay wagon, moved the saw blade over a notch using a guide marked with luminous tape, flipped the blade to vertical, and did it again.

Schuldt has macular degeneration and glaucoma. The process began about 20 years ago. He became blind in his left eye about 15 years ago, then his right eye slowly followed suit. He has some peripheral vision. “I don’t see features, I see forms,” he explained.

The loss of vision was a blow to his part-time job of operating a saw mill. That’s something he has been doing for 50 years. He had a bandsaw mill set up on his home farm at the end of Walnut Road east of Freeburg, where he and his wife, Margaret, lived for many years. But the more his vision worsened, the more his family feuded with him when he operated the mill. “And they were right,” Schuldt said.

Schuldt got around those objections when his friend, Howard Lampert, heard about the Peterson Portable Sawmill of Rotorua, New Zealand. Schuldt made a phone call, was sent a video tape, and liked what he heard and saw. He told them what he wanted, got a price, and custom ordered the mill 2-1/2 years ago. It arrived in Rochester, Minnesota, two months later, at a cost under $10,000.

There’s a lot Schuldt likes about the mill. He talks about it with a touch of pride and admiration in his voice. It can take logs 20 feel long and 52 inches in diameter. It can be disassembled in half an hour by two people, using one wrench and by removing two bolts. It doesn’t need level ground either, which is handy in the hill country of Crooked Creek Township, where Wilbert’s roots are about as deep as a big oak tree. It produces uniform wood, and uses 85 percent of the log, with no need for edging.

Sawdust in his veins

And it’s the safest mill – if you do everything right, he said. Luminous tape marks the different settings that Schuldt needs to know, and the 8-inch circular blade is protected from human contact at the bottom of the engine housing. Just make sure the sawmill is moving in the direction that the blade is turning; otherwise it will climb the log and create a big problem.

But why does he still run a sawmill? “I think you get sawdust in your veins eventually,” Schuldt answered. He made his first box sawmill half a century ago, using it to make fish boxes for places like Epstein Fisheries and Lansing Fisheries. Those jobs paid for his farm, Schuldt said.

He bought a commercial mill in 1982, and used it when he wasn’t working as a boiler operator at St. Rose Convent in La Crosse, Wisconsin. He’s not doing it so much for the money now though. “If it pays its own, I’m happy,” Schuldt explained. “I just wasn’t built for sitting around.”

Schuldt’s eye doctor in La Crosse wasn’t thrilled to hear about Wilbert’s sawmill acquisition. “He said. ‘I’m putting it in your records that I’m opposed to you buying a sawmill.’” Wilbert recalled with a chuckle.

Schuldt’s favorite wood to saw is red oak. “I like cherry, I like native red cedar, but you can’t find much of it,” he added.

After we left the sawmill area, Schuldt pointed to a pile of boards in am open-sided shed, and mentioned that there was even more in another pole shed on his two acre parcel. He figures he has at least 10,000 board feel of lumber stored and waiting to be sold.

Before I left, Wilbert invited me in to his house. He showed me his Aladdin Ultra reading machine, which he acquired with the help of Jan Bailey and the Veteran’s Administration. Bailey, who is also blind, works for the Minnesota Association for the Blind. His daughter, Alta Lampert, and his niece, Elaine Welscher, encouraged him to contact that association. “I decided I don’t have any problems at all,” Schuldt said, referring to the things that Bailey showed him. “She was an inspiration.”

His wife, Margaret, is fine with Schuldt’s sawmill work too. “It keeps him occupied,” she said.

By the way, that cottonwood log contained 650 board feet of lumber, Wilbert told me the next day. He had finished sawing it by then. And yes, Wilbert Schuldt still has all his fingers.