Well I could talk about all the successes the company had this year; how many hundreds of mills we sold, the fancy new gizmos we designed, the awesome Skillmill we just released, and all the (totally valid) reasons why you should buy our product over the next guys….

Or I could focus on the people that made it all happen. The individuals that do their own thing, often thousands of miles apart, but who all – sometimes even unknowingly – work together to develop and grow Peterson Sawmills as we know it today. What did they do in 2006?

Owners and operators are the backbone of our development, and the fuel for progress. They give us valuable operational feedback, which directly results in those fantastic yearly upgrades. They travel hundreds of miles for us, proudly demonstrating their mill at various field days and equipment shows. They spend hours on the phone and internet, answering ‘newbie’ questions and helping other new owners get started. Guys just like Tom (& Kate), Jeff, John, Russell, Mark, Lester and Doug, Kel, Stan, Craig, Chris, Raymond, Jimmy, Matt, Gary, Rob, Foxleys, Bryce. 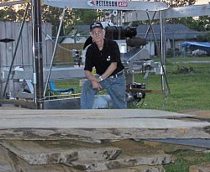 Chris DeStephano with his ASM.

But lets take Chris DeStephano for instance. He’s not an agent, he’s not a commissioned rep, he’d never even run a sawmill before his Peterson ASM. Chris is a slight man, one who’d spent most of his life behind a desk – that’s until he got sick of office walls, took a running leap, and landed in a pile of logs! Over the phone we helped him through setup, the theory of a swing blade, and how to get the best out of his mill.

He proudly sent us lots of photos of his milling jobs. And then he offered to bring his mill to the Georgia show for us. He took two weeks off work and spent four days packing his tandem trailer with everything but the kitchen sink – extra skids, wedges, tools, chairs, tables, a spare tent, cases of bottled water, his lovely fiancée Cathy, and a map to guide him through the two states. Over four days of extreme heat and 90% humidity, Chris ran that ASM through hard old Oak logs like a hot knife through butter…the only thing he wanted? A little training and a service of his mill.

Of course we gifted him some extras too. He left exhausted, covered in dust and sweat, with a handshake and promise to do it all over again next year. Here’s a raised glass to you in 2006, Chris. Thank you. DanG and Dave, you were awesome guys too for the beaut logs, persistent muscle moving boards in that stifling heat, and the barrels of laughter when we needed it the most. 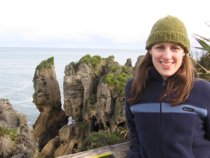 Trudi Edmeades, touring in the South Island of New Zealand.

Back in NZ, in the office behind mine, there’s Trudi. She doesn’t say much, but she got it, that people judge us by what we look like and how we speak. Our website is our face, our letters and brochures are our language. I judge a lot of books by their cover too – however wrong that may be. She changed this book’s cover. She created a face that can be found, seen, and is inviting. A happy face. Look at the staff profile page – can you fake smiles like those? And Trudi created a language that is universal, with topics that interest all millers.

Her newsletters have real stuff in them – a new operator’s trials on setting up their first mill, owner’s building projects, timber species and uses, tips and tricks to get stuff done quicker, and for those that just want to relax – the ever popular Bubbels game. And Trudi did something else too – she reduced the miles between us and our customers. There are more and more of you actually finding us, the “worlds best kept secret”, and fewer and fewer of you hesitating over a purchase from across the other side of the world. Our export lady Marama sends your manual ahead in the mail, and gets your mill to you efficiently. Then Trudi is right there with you, seemingly capturing your excitement as you unwrap your new purchase. Then she sends your stories around to all of us, and we’re all still together, sharing the great sawmilling journey. Here is a warm smile for Trudi’s achievements in 2006 – thank you for bringing Peterson designers and Peterson customers closer together. 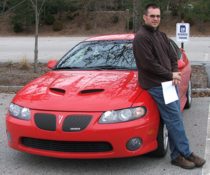 Craig Blake stands next to the 2007 Pontiac GTO.

In the US, in Massachusetts, there’s Craig. Craig knows passion, and hard work, and commitment. He knew there was little money in peddling Peterson mills, but that didn’t matter. He fell in love with what the product could do for people, and climbed arduous mountains to show others. He worked double shifts, often left his family behind, and clocked up the speedometer miles to sweat it out at shows. He spent unpaid hours at night answering questions on the forums, his wife deciphering exchange rates and reconciling invoices.

He became our right hand in America in 2006, and the person everyone turned to for help there. But now our legs are becoming stronger, and Craig needs to give his family more time again. Thank you for your undying commitment and achievements in 2006, and we wish you even more success in your ventures for 2007. 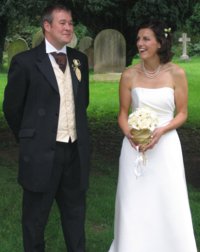 Rosie on her wedding day in September.

In England, in York, there’s Rosie. Rosie is the one that pushes me to squint beyond my current range of vision – to set goals I didn’t even think possible. She’d run my marketing department here in NZ since 2001, before heading back to England last year to help her dad run his farm and holiday camp. While she was here, she usually netted 1-2 new agents worldwide per year (we go to great pains to find the right person that will support our customer service commitment). But Rosie said she could double that by herself in Europe alone, simply by being there instead of here. She gave me an overly-optimistic business plan and asked for a tiny living budget. What could I say. She set off home via some elephant-riding in Asia, and initially set up office in a corner of her dad’s attic.

She’s since got herself a nifty laptop and business cards, and we’ve sent her a full promo pack of gear with sawmill samples. This year she has officially been the Europe arm of Petersons, attending triple the number of shows we would have had from here. From organising all the trips herself, getting logs for shows, training demonstration staff, and turning up to run the sawmills herself, she’s not only become Chief Sawmill Technical Advisor, but also Marketing Manager, negotiating some pretty big deals. Guess what? She’s already set up two agents, sold both sawmills we sent for her shows, and is currently working on a third agent’s first big order. And it’s not been quite six months yet. She even had a white wedding somewhere in the midst of all that….!
Now she’s chomping at the bit to get the Skillmill into Europe by May, a seemingly gigantic task to achieve CE Certification in time. But I suppose if she thinks we can do it, we can. Thank you Rosie, for pushing us the extra mile and proving me wrong in 2006. I will learn to trust more.

And on the other side of the bed, there is my pillar of support, my wonderful man Chris. Why he possibly said yes at the tender age of 18 I’ll never know. But it’s been a great journey so far together. We are fiercely competitive, and also push each other forward at every hill. He has great insight and reads people well – he’ll tell me if I’m being a little too hard at the bit. But he supports my business goals and plans 100%. He was there, saying “go for it” when I hesitated about starting my own company. And he’s a hard worker too – the hardest I’ve ever come across. He’s here, there, and everywhere at once. He’s up early feeding the chooks and pigs, off to work to nut out a new drawing process, and gulping his morning coffee before heading over to instruct some assemblers in the factory. Next thing you know he’s on the other side of the world sawing up a storm at a shootout – the pictures on the forum reach us before he even gets back to his hotel. Returning just in time to finish the new deck, he’s straight back into the factory to help pack the next container load. I could force him to have a break or go on vacation. Vacation is hanging out the driver’s window drooling over some old log by the roadside or that straight-as-a-barrel ancient gum tree in the reserve. Down boy, kids want a swim now. So we compromise and swap roles for a while.

He understands when I have to work late on paperwork, and that that means I’ll be home somewhere around midnight. He’s a great dad too. He takes the kids to their athletics and their concerts, teaches them to climb high and to fight the bully back, and reads them their bedtime stories. And after midnight, he warms my icy cold hands against his bare chest when I finally climb into bed. What more could a woman possibly want? Here’s some warm hands to you Chris, for being there for me in 2006.

Next year, we will see you all at the Great Portable Sawmill Shootout in the US in May, where we’ll put the Skillmill through its paces. Fingers crossed, we might even get to a show in Canada and another at Ligna in Germany. With all the new staff on board, it should be a breeze. Yeah, rite – it’s actually you guys that really make it happen!