I had only been working in the timber industry for four months, when I was asked to go on a six state tour of the USA. I would be releasing a new addition to Peterson Portable Sawmill’s range of mills. The tour would include four of ‘The Woodworking Shows,’ and two Agricultural shows. Petersons attend agricultural and forestry shows worldwide every year with their high production mills. With the release of Petersons new Skillmill, a hobbyist’s mill, this would be the first time there were woodworking shows on the schedule.

Having only been given a couple of months notice that I was going to be demonstrating at these shows, I got busy learning as much as I could about woodworking. I read magazines, researched the Internet and joined discussion forums. Although I felt like I had covered a lot of ground researching like this, I knew nothing would teach me more, than seeing the art in action, so I booked the Skillmill in for the Kawerau Woodskills Festival.

Positioned next to the Chainsaw carvers, I thought we would be right in the middle of the action, but when I got a chance to go inside, I saw that the outside displays were just the beginning. The furniture, toys, and other artistic wood creations that were exhibited inside were amazing. There were demonstrations throughout the hall. I saw a ‘pole lathe’ in action, and got to talk to woodworkers in the flesh. By the end of the day, I felt that the Kawarau show had been good preparation for the USA.

So with a little knowledge under my belt, I headed off to the USA, first stop, Buffalo NY. Chris Browne, CEO of Petersons manufacturing company P&B Engineering, Craig Blake, a mill owner and good friend of ours from Massachusetts, and I set up our gear outdoors in chilly 5ºc weather. Using good old Kiwi (and Blake) ingenuity and moving quickly to keep warm, we secured our displays with rope and duct tape, jimmied up some safety boundaries and set our mills up in only a couple of hours. Our site was ready; we were then free to take a look indoors.

Most of the demonstrators at ‘The Woodworking Shows’ are full-time; they follow the circuit around North America during show season. They have their displays packaged so they are set-up ready to go upon unloading. Delta Machinery had backed the trailer of their big rig onto the enormous polished floor of the centre. We thought that was a bit dodgy, until the sides came down and the tools and seating for demonstrations came out, and we realized the trailer was their display!

Porter Cable and Dewalt were two of many tool and timber suppliers in the Agri Centre at the Hamburg Fairgrounds in Buffalo. There were companies offering vacuum pressing and clamping systems, power tools, glue, saw blades, router bits, exotic wood blocks and burls and more. There were over 50 exhibitors it was a Woodworkers dream. Each one of them had live displays and demonstrations, and most had seminars by notable North American woodworkers. 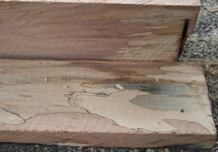 But I wasn’t here to look around, so I headed back outside, and amidst conversations with fellow exhibitors and passers by, we started cutting. As with most shows Petersons attend, our logs had been donated to us – this time by local Scot Helfer – they were Spruce, Oak, Cedar and a 20” Maple. By the second day of the show we really got into some cutting, finishing ¼ of our quota.
We rolled the big Maple in place, thinking that we could cut this one slowly to spread out our stock. As is normal, we took the top off the Maple log and threw the bark into a ‘scrap’ pile.

“Hey, hey, what are you doing? Don’t throw that away!” Were the shouts that came from the spectators’ area.

Looking at the top of the log, we noticed patterns running through the timber. It wasn’t the grain of the wood, but a fine black line, running in all directions, looking somewhat like a map. Upon speaking to one of the woodworkers watching our mills, we found out that this type of Maple is called ‘Spalted Maple’. Spalting is a fungus that runs through the log after it has been felled. We were very lucky that Scot got to that Maple at the right time, because there is a fine line between attractive spalting and tree rot.

We made our way through the log cutting 6×4” blocks which we placed in a pile by the spectators’ area with a sign saying $5 each. Word soon spread around exhibitors at the show, and we started to get more and more visitors to our site. They weren’t just asking about our mills, but sifting through the blocks, looking for one that suited their needs. 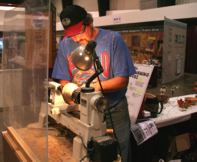 Paul Mazuchowski has been a wood worker his whole life, and had started turning eight years ago. He was exhibiting with his club, the Western New York Woodturners #2, and came out to take a look at the blocks we were cutting. He asked if we wouldn’t mind if he took one of them and turned it with the Jet lathe the club had bought to the show. We gave him a couple of blocks and caught up with him inside not long after.

When I went in to see what Paul was doing, I had a look at some of his other artwork. He makes bowls, flowers and pens for his wife, and once made a three-foot clock for a charity competition. “I don’t turn for a profit, it’s a hobby to me, one that I take seriously, but I don’t want to take the magic out of it by selling every piece I make.” I even asked to purchase Paul’s maple leaf bowl, but he turned me down, “I don’t think my wife would be very happy with me if I did”.

At home Paul has three electric lathes, one, a Vicmark lathe he says is well built and will last for years. “Mine is seven years old and I’ve never had a problem with it”.

His favorite wood to work with is Cocobolo, which is a hardwood from Central America. It’s the second most dense wood in the world, which makes it perfect for turning as it finishes very smoothly. Paul likes working with Cocobolo because he likes the way it looks. “The colours and grain pattern are just awesome”.

Paul enjoyed turning our green maple as he says green turns easier than dry wood, “it just cracks sometimes and doesn’t finish so well”. Lots of people stopped by and watched as the block unfolded into a beautiful small bowl, which took him just over 30 minutes. Paul also turned pens for each of us.

Outside, we continued to sell the spalted bocks for the duration of the show, and had over 30 people watching as we cut a slab, by turning the log over when we got close to the middle, and cutting in from the other side.

I had a great time learning from Paul and the other exhibitors at the Buffalo Woodworking Show; they were all very accommodating, and happy to show a newbie the ins and outs of their passion. I now feel confident in that I know the basics of woodworking and am looking forward to the next time my name is on the roster for more shows like these.