Bananas and Sawmills Save the Planet 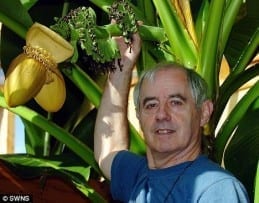 Mike Hillard with a banana grown in his foyer. Photo: Mail Online

Mike Hillard owns a company called Tranquility Houses Ltd, in Stroud, Gloucestershire. In his eco-friendly home that costs only £60 to heat per annum, he grows bananas in his Solar Room while it’s –8 degrees outside. Mike has now turned his attention to the efficient recovery of old trees, with an environmentally friendly portable sawmill.Fundamentally, Mike is an academic researching the Environment and then finding ways to minimise our impact on Planet Earth. He spent most of the 15 years from 1994 to 2009 researching important resources to determine the truth about how precarious our lives are and what needs to be done to protect our environment.  Subjects such as ‘Climate Change’, ‘Energy’, ‘Food’, and ‘Population’ are only a few that Mike has written and published substantial papers on.  Other entities such as KPMG, MENSA magazine, and Jim Hansen of NASA have either endorsed or concurred with his findings. 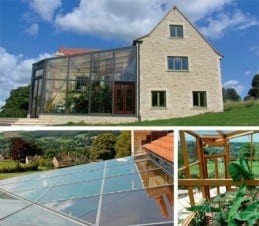 Tranquility House, possibly one of the most energy-efficient homes in the world.

Having understood the scale of the environmental problems we faced, Mike then built the lowest energy house in the UK (Tranquility House). To achieve this, Mike needed to constantly seek improved performance until he could not cost-effectively go any further.  A major documentary film maker is currently interested in making a 4 x 1hr series on Mike’s housing project. However Mike has first been asked to build a new one and retrofit an existing house within a mere six months. The new build will include even more advanced solutions than in Tranquility, as Mike now knows how to improve on its energy efficiency ratings even further. Mike also traced the source of timbers used in the whole building process. As Mike explains “I know we must make the very best use of every single tree that is felled. But unfortunately many trees in the UK and around the world are put to little or no use when felled.  We bizarrely import rainforest timbers when we have lots of terrific timber here, just left to rot or chopped into firewood. Even worse as is often the case, many trees are just piled on huge tree-funeral pyres and simply burnt. The bigger sticks (logs) often cost more to turn into firewood than they are worth”. 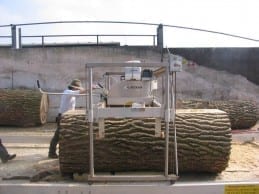 Therefore Mike knew a portable sawmill was the ultimate solution, but it had to be one with a great amount of versatility as well as efficiency. Mike says “Many of the sticks (logs) we receive are relatively huge with many over 1m in diameter, some up to 1.5m diameter.  We were initially expecting to acquire a ‘Timberking’ B2400 bandsaw mill, but it was then suggested we consider a Swing Mill, and especially a Peterson.  It so happened a local owner of a WPF no longer needed his and was looking to sell it so I went down to test run it and find what it could do”. After successful trials with the machine, Mike’s company bought it.  And he has since received great pro-active support in many ways from the Peterson UK agents – Log Logic. Mike reports “Log Logic were very good; they were very helpful and informative with their advice and training”.

So Mike is now taking sticks from often prestigious places and turning them into beautiful products – so far mostly flooring and Dining Tables.  Mike’s prime sources of sticks are The National Arboretum in Westonbirt, the National Trust, major estates, and other local woods.  Prince Charles’s Duchy of Cornwall has recently asked if they could supply Mike. In every case, Mike knows precisely where the tree grew and why it was felled, so the provenance is as good as it gets. No tree is taken if felled purely for profit. 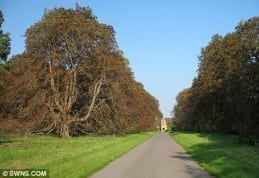 Recently the entire avenue of Aesculus Hippocastanums at the National Trust ‘Barrington Court’ had to be felled as it had bleeding canker. Mike took all the bottom butts and converted them into some of the most gorgeous products he or most have seen. “Everybody drools over it”. As Mike’s project nears maximum efficiency, the entire process from standing tree to finished product will often need no more than 20 miles of transport.  Even the kiln drying will be powered by waste timber from the milling.

Mike spoke of a particular job, “Two weeks ago Prince Charles gave us a native British Poplar which had been felled due to rot in the butt.  The tree was located on Broadfield Farm in Tetbury, which is Prince Charles’s main production farm. It was over 11m long and 1.35m just above the butt end.  We cut it into 4 shorter logs before milling. At that time we had worked the new mill for two short days and one longer one. We had to wait for the farm telehoist to put the remaining logs in place so we only managed about 6 hours actual milling on the last day. BUT we milled about 6.3m3 of log (2 of them) in that time. There were two of us manning the operation – one removing the boards and me milling. All the boards milled were either 18mm for flooring; 39mm for dining table tops, or 85mm for the table legs. I was extremely impressed with the production as I assumed we would not achieve a good volume when cutting so many thin boards. And that was on only our 3rd working day!” 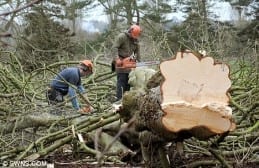 So where to from here? Mike is already speaking of the future “I am very impressed with the WPF we are now using, but want to perfect the operation. I am sure we will want the automated ASM model in the not too distant future as pushing the WPF to achieve this volume on a continuous basis is demanding, and my personal time is too valuable to spend much time milling.” 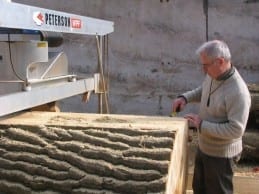 Mike also has quite a number of photos of Tranquility House, and exhibited at the NEC (National Exhibition Centre) in April where they were on display. Mike says “We make a big deal about the fact we do go all the way ‘from the forest to the floor’ which makes most customers smile. People love the notion we can tell them exactly where each tree grew”. When asked to compare timber recovery efficiency, Mike provided some interesting statistics “I am hugely impressed with the Peterson WPF and have realised it is truly an environmental mill. At first sight having a 5.8mm kerf against about 3mm for a band saw seems seriously bad news – but it isn’t.  On the band saw we have been using, we needed to cut 20 or 21mm boards to produce 12mm finished flooring. But the milling accuracy on the Peterson will allow us to cut 17mm boards from the start. Therefore the log yield, even for such thin milling, is about the same for both machines. Another benefit is that we are using less power and ending with less waste. We are now air and kiln drying considerably thinner boards from the onset, which dry faster and use a lot less kiln energy to bring them below 10%.  And it doesn’t stop there. When you are machining fatter boards through a 5 cutter, the rate at which the planing waste builds up is a big issue. With the more efficient Peterson boards, that waste is almost exactly halved. So well done; a great piece of equipment, and all who have so far seen us using it are extremely impressed. I doubt The Duchy will buy one though, as ours will surely now mill everything they want!” 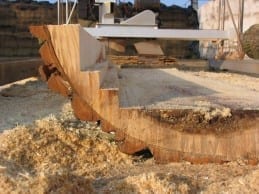 Top yield from Peterson – comparable to a bandsaw even on thin boards, with no log turning.

For more information or quote on a Peterson sawmill in the UK, you can contact Petersons’ New Zealand factory direct for technical advice or to view their full range of portable sawmills at www.petersonsawmills.com, email sales@petersonsawmills.com, or Freephone 0800 028 0863 before 10am (UK time).