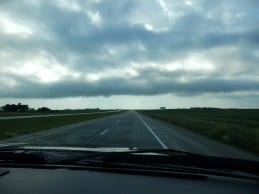 Driving across Iowa we spent an hour moving towards an ever-darkening expanse of cloud. Hearing about the double-tornado in a neighbouring state the day before, I half expected a funnel to touch down. Eventually the heavens opened up and dumped the hardest rainfall on us that I have ever experienced – so hard in fact that we could not see the cars in front of us, and slowed to a crawl on the interstate. But then it magically cleared up and the sun shone as we arrived to meet Russ Wilkins and his grandson Alan.

We’ve all seen the TV episodes of hoarders, rite? Well my friend Russ is a log hoarder. Hidden amongst the lush flowing spring grass and shaded under the green leafy trees lining his ambling drive, are piles upon piles of logs of every possible species and size one could imagine. Some he bought, but most have been given to him as people discovered he would take unwanted logs. I can’t begin to think what a gold mine Russ has. I only hope to goodness he gets around to sawing them before they begin their journey into less valuable timber and eventually succumb to nature. 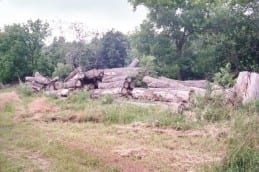 Russ began planting on his beautiful 47 acres in 1966. He currently has 20 acres of lush white pine, river birch, black locust, various oaks, scotch pine, shagbark hickory, silver maple, and green ash. Some of his trees are even nearing sufficient size to harvest. But that hadn’t even been on the plan when he first planted them.

Back 45 years ago, Russ didn’t have a clue about sawmilling or harvesting timber. His background was growing nursery trees, so he knew that Christmas trees were a good investment. His early plantings were sheared annually in the shape of perfect Christmas cones. As the unsold ones grew to unreachable heights, the lovely pyramid shapes took on wild-looking bushy heads. Russ had to think of a new long-term plan for the now-woody trees thriving on his farm.

Meanwhile, Russ was also noticing the truck loads of unwanted urban logs going to the landfill, “It was heart breaking to see good timber going to waste like that, and people were having to pay $27 a ton to dump it.” So he started doing some research in 2000 on the potential of a small portable sawmilling operation, “There were no other custom millers around here. Once I got talking to people, many promised to bring me logs and give me sawing jobs they wanted done.” Russ had good contacts with the various District Foresters of the State, who also encouraged him to take on the project.

Russ initially tested a bandsaw at the Iowa State University, “It was OK, but it was slow, and you had to turn the logs.” It took nearly 1 ½ years of investigation before Russ finally settled on a Peterson Portable Sawmill in 2002, “I was getting on and I needed something that would be achievable for me to operate on my own. When I discovered the Peterson, it was everything I wanted. It was much quicker sawing, but the biggest thing for me was the log handling ease. I wasn’t as energetic when I bought it, and I’m even less energetic now, but I can still run this mill easily. It does everything I want – I get all the big stuff [logs] no one else can do – even the firewood guys. And to cut the amount of timber I’ve done now [on a bandsaw], I would have had to spend 10-20K in blades!” 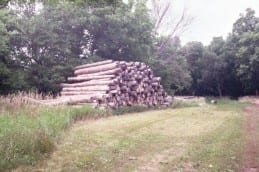 “I visited forever with Petersons on the phone beforehand, so I was comfortable sending money overseas to them. I’d never imported something this big before, and haven’t since, but this process was reasonably easy with Petersons.”

Once Russ received his mill, he initially put a small ad in the local paper and phone directory, but most of his business comes from his Forestry Department contacts and word of mouth, “The Woodweb and other trade-related internet sites continue to send me referrals too.”

But Russ has no urgent need for more logs to saw – the piles of cottonwood, sycamore, walnut, oak, ash, pinoak, silver maple, white pine and spruce around his property will keep him busy for many a season to come.

Russ’s business is one of only 12 in the entire state of Iowa that hire out sawing services. Even though officially retired, his sawing business keeps him busy. He usually does a couple jobs a week – mostly where the log owner brings the logs into his farm and takes away the lumber. “I also take my mill to them if needed for the bigger ones. But it works well at my farm because I have the mill undercover and I can use my little bobcat to put the logs in place.” Russ charges a flat rate of $50 per hour of sawing time, since there is such a variety of log sizes, log quality, lengths, and board sizes requested. “If I had to work it out per sawn board, the bookwork would be a nightmare.” 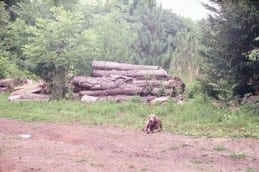 When Russ is required to take his mill to an external job, he usually takes his grandson Alan or other family members along to help tail. “It costs a bit more for the customer, but is often easier for very large logs that would be hard to transport. I charge $50 per hour for my travelling time, and a $50 setup fee at the site before I get into the logs.” Russ also uses a metal detector to scan the logs for nails and wire – gross hardware in the logs requiring a retip will cost around $75 per full blade, “One thing the metal detector won’t find, is ceramic insulators!”

All three of Russ’ original blades are still going strong 12 years later, having simply been retipped as they’ve worn down. “I’ve got the jig in my barn, and it only costs a few bucks a tip doing it myself. I get the tips from your new US blade supplier, so postage is cheaper and faster.”

On the day we visited, Russ proudly showed off his milling site on a quiet area amongst his beautiful trees. He has carefully arranged his sawmill shed to have logs brought in from one side, and sawdust expelled out the other. The shed allows him to carry on sawing in wetter weather. But he admits he still struggles with some of the things nature throws at him, “Over winter I put a tarp over the motor, but the squirrels used it for their cellar and nut shells were all jammed in there. It was quite a job getting all the pieces out of the motor.”

Russ proudly shows off his black board for tallying sawn boards in one corner, “It’s easy keeping track of jobs when you can record as you saw. I use chalk because whiteboard markers freeze and don’t work. But then the mice loved to eat my chalk, so I had to design a special holder that they couldn’t get to.” Russ then proceeds to put his safety gear on in readiness to starting the mill, “Oh yeah, the birds have stolen the sweatband out of my helmet for their nests.” 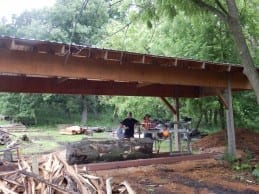 After sharing a few tips and tricks between Russ and Chris, the mill is started up. Russ proceeds to whip the first few boards off a cottonwood log. I can honestly say he has that mill absolutely purring.

When asked what maintenance Russ had spent on the mill over the last 12 years, he scratches his head for a bit…”All up about 35 bucks on the little repair kit you guys sell for the gearbox.” Russ has added an exhaust extension though, to expel fumes further away from the mill head.

After visiting the sawmill, we tour some more of his farm, taking in the lovely secluded family picnic area, and of course the never ending track lined with logs – each pile with it’s very own history and plan.

Russ says the Peterson mill keeps him healthy and happy. Prior to getting the mill, he had several heart attacks and undertook four bypasses. He also has a metal rod and titanium plate in his tibia, from when a tool broke his leg many years ago. But since getting the mill, Russ has had no further heart problems. At 71 years old, Russ says “The sawmill is my therapy – it keeps me young.”