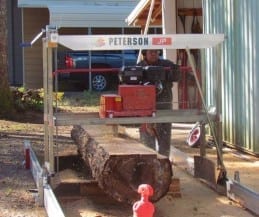 After yearning for a small sawmill for more than 20 years, Ted Isaacs now proudly bears the distinction of being the first U.S. owner of the Junior Peterson Swingblade Sawmill. As a novice sawyer and serial tinkerer, Isaacs is having a blast getting to know his “hobby mill.”

Ted Isaacs is enjoying retirement at 67, and relishing his independence. He and his wife live comfortably on a 10-acre farm near Estacada, Oregon. Once a busy hub of Oregon’s logging industry, the quiet area 30 miles outside of Portland, is now home to family-owned agricultural operations—from hazelnuts and Christmas trees to grass seed, grapes, and a few small family owned tree farms. And Isaacs loves it. 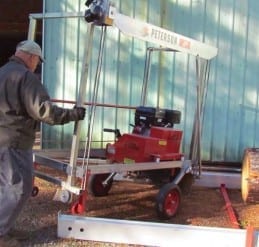 Isaacs rolls the lightweight JP out of his shop.

“I like to be independent,” he said. “We grow our own food. The more independent I am, the happier I become!” That’s one reason he wanted a mill. “I’d watched my neighbors run their saws and I’d been looking at mills for about 20 years. I wanted to be able to cut my own boards and do whatever I wanted to do.”

But he had no experience as a sawyer, so he needed to find something simple to operate. He didn’t want to make a business out of sawing logs, he explained. He simply wanted to cut fence boards for himself and neighbors; siding for outbuildings; materials for his two sons who are both woodworkers; maybe build a little cabin, and basically “putter.” And he didn’t see the need to spend a lot, either.

“When I saw the Junior Peterson, it was perfect for my needs,” he said. “I liked the price point and the fact that it was a one-man operation. Once I put a log on the skids using my tractor, I can operate it all by myself.” Isaacs said he’s watched friends use band saw mills. “They have to roll the log after every cut, and then cut slabs, which they later have to rip,” he explained. “With the swingblade, moving the log is not an issue.” He also liked the fact that Peterson is a family-owned and -operated business. So he ordered the Junior Peterson. In fact, he was the first person in the U.S. to receive a JP.

Isaacs sets the JP in its tracks.

When the mill arrived in April 2013, Isaacs quickly uncrated it and started looking for an operations manual. “I couldn’t find one, so I called Peterson,” he said. “It turned out, the manual was still at the printer.” As a testament to the simplicity of the mill, Isaacs had the JP assembled and up and running in two short days despite the fact that he had never owned or operated a mill, much less set one up, and he had no written instructions.

After using the mill to essentially edge the log, Isaacs sets up to mill his first 2 x 4.

Of course, it wasn’t all smooth sailing. “I ran across a few problems with the belt tensioners,” Isaacs explained. Initially, he said, the V-belts were a bit loose, so he made several adjustments. “I used the tensioners and got it as tight as I could get it, but it still wasn’t quite right, so I called Chris in Peterson’s technical department.”

Isaacs said he placed shims under the 13.5-hp Briggs & Stratton engine to raise it up. “Chris and I tinkered a bit over the phone, and together, we got the mill running smoothly,” he said. “So I guess I was what you call a beta tester.” 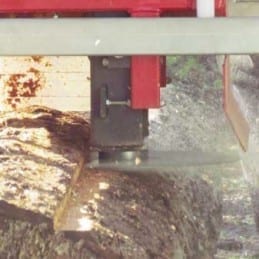 The pivot point from the vertical to the horizontal cut proved extremely precise.

Isaacs said that, when working the problem, Peterson tech support realized they had been testing the JPs with a larger-diameter test pulley than that used in the production line. All JPs now have standard motor shims to ensure accurate Vbelt adjustment.

The next challenge was to level and square the blade, but he said Chris helped him out again. “Because everything was so new, I think Chris and I were solving problems together,” he said. “I felt like I was a pioneer and part of the family,” said Isaacs. I like to think that people who got the mill after I did benefited from that beta test!”

At only 660 pounds, the JP is small enough to put in the back of a pickup so an operator can take it into the forest and cut a log where it lies. Isaacs, though, wanted a stationary cutting area. “I have the ability to bring a log here,” he explained, “so I set my tracks where I can cut right in front of my shed.” Isaacs anchored the center of the rigid track system with a long metal stake. The balance of the track is held in place with compression. “It only took me two or three hours to set up the tracks,” he said. “I bought the original tracks, which are 18 feet 8 inches, but after you mount the mill, you lose about 4 feet, so I bought several extensions. I can cut a 32-foot log. And I could add virtually unlimited track extensions if I chose to.”

Ever the serial tinkerer, Isaacs then added a little feature of his own. “I cut a lot of pitchy wood, and the sawdust builds up on the wheels,” he explained. “So I added a couple of nylon sweepers at the front of each wheel to keep the tracks clear.”

The Millin’ Is Easy 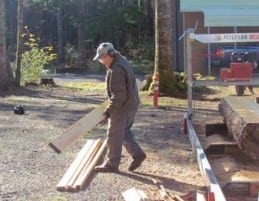 Within minutes of opening his shop door in the morning, Isaacs has his JP set up and is sawing dimensional lumber.

With the mill operational, Isaacs started cutting. Within a few days, he had sawed five Douglas fir logs. “I was pretty proficient using the mill within a couple days,” he said.

“I had milled 2 x 4’s, 2 x 6’s, and 4 x 6’s. Just for fun, I took the bottom 4 inches of a log, flipped it, squared the bottom, and made a slab that retained the natural shape of the log.” He used a double cut to create a 12-inch-wide bench for his yard. Before you know it, Isaacs was milling 21-foot-long fence boards for his neighbor’s pasture and had quite a stack of lumber.

Now, Isaacs can set up and be ready to work in five minutes. He simply grasps the mill by two vertical supports, tips it up on its rubber tires, rolls it out of his shop, and sets it on the tracks. “It’s just like moving a hand truck,” he said. After placing the mill in the tracks, he removes the 8-inch wheels and stationary supports and is ready to work.

To set up a cut, the JP features a manual, single-point winch system that allows Isaacs to lower all four corners equally for a precise cut. With the swingblade, Peterson explained, he doesn’t need an edger. “I don’t need an edger. I just start pushing away to cut the horizontal. I’ll make a 6-inch cut on a pass, then I’ll swing the blade up, and on the way back I cut the vertical section. I’ll throw that first outside cut on my scrap pile. On the next pass, I’m cutting dimensional lumber. It’s that simple.”

He said he’s also used the mill to cut angles, such as L shapes, octagons, and clapboards.

To cut wide beams, Isaacs can make a double cut by simply swinging the blade over and joining two horizontal cuts together. “Using that technique, I can cut a 12-inch board,” he said.

“I was really impressed with the pivot point on the horizontal and vertical cut,” said journeyman millwright Bob Hendrickson, as he watched Isaacs operate the mill. “It’s perfect. If a pivot point is even a little bit out of square, it will leave a small trace or mark on the board, but these are coming out pristine.”

So far, Isaacs said, he hasn’t a single maintenance issue. “The Briggs & Stratton is a real reliable engine, so I don’t expect much maintenance there. And the JP comes with two carbide-tipped saw blades and a sharpening kit, so it’s a snap to keep it milling well.” To learn how to sharpen the blade, Isaacs watched the online video. 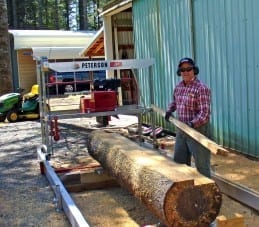 Isaacs is thrilled with his “hobby mill,” using it for various projects around his farm. Though he is primarily sawing Douglas fir, he’s also working his way through a pile of black walnut with some interesting history. “Through this process, I really got to know the people at Peterson,” said Isaacs. “They’re friendly and they listen to their customers, so I was happy to be the beta tester. And I’m tickled with the mill, especially for the price. It does everything I need.” 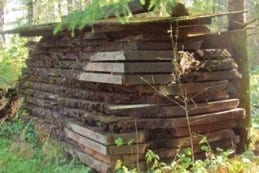 Isaacs has several huge stacks of black walnut slabs that came off his dad’s ranch and traveled over on the Barlow Trail (the most harrowing 100 miles of the Oregon Trail through the Cascade Mountain Range). The tree was well over 100 years old when it was cut, Isaacs explained. The butt piece is 6 feet across. From the stump cut to the yoke, it weighed 23,000 pounds. Isaacs hired a Campbell crane with a flatbed to move it out to his property.

With Isaacs using the JP to mill the slabs, his two sons are working the wood into a new mantle for Isaacs and his wife, as well as making tabletops, boat decks, benches, conference tables, and other furniture made to order. One long, narrow edge-piece resembled the Cascade Mountain Range, so his son used it to create a silhouette wall hanging, a tribute to the rugged trail over which the massive tree once traveled.