The Junior Peterson – Rich with features every sawmiller can appreciate 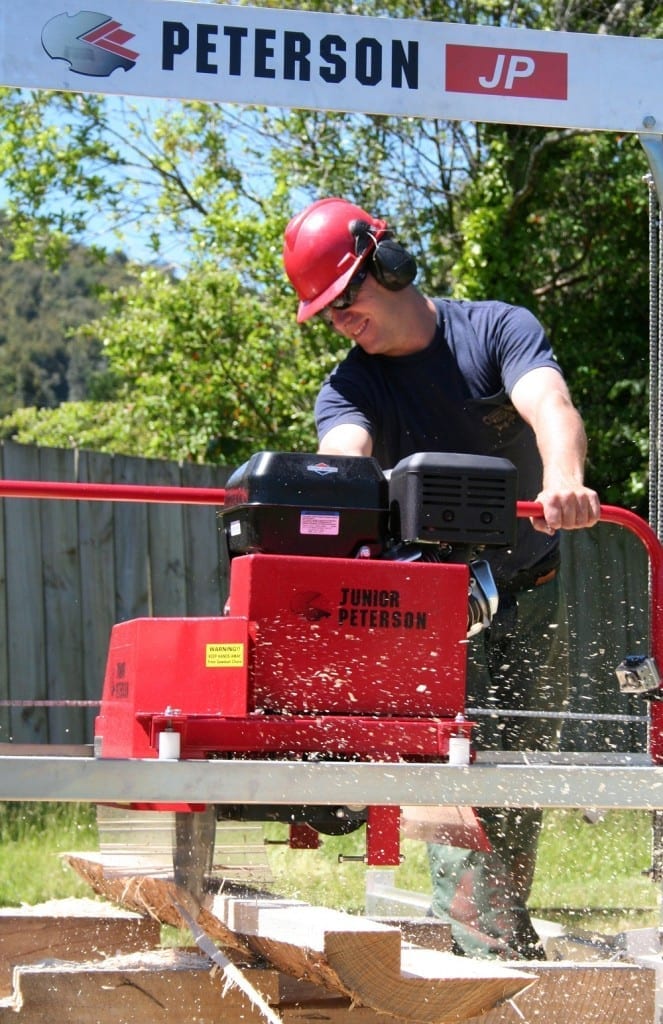 The Junior Peterson may have a smaller cutting capacity than the rest of the Peterson Portable Sawmill range, but it is still rich with many of the sawmill features that have made the Peterson brand stand out from their competitors for decades.

The Junior Peterson was designed based on Peterson’s semi-commercial flagship model, the Winch Production Frame. Both sawmills have one winch at the operator’s end which is used to raise and lower the parallel tracks that house the centre unit.

Other swingblade mills have dual winches at each end of their mills which require the operator to walk to the far end to make vertical adjustments. To Peterson’s designers this was time better spent milling, and is just one feature that makes the range more efficient than other swingblade mills on the market.

In the early days at the research and development stage of design, the Peterson team discovered that mounting their sawmill engines higher than other manufacturers meant that sawdust wouldn’t need to be cleared as often, also saving time.

Accurate horizontal sizing is simplified on Peterson mills to aid in efficiency with simple, proven sizing devices right at the operator’s fingertips.

The JP has a maximum cut of six inches in one pass allowing six inch by six inch beams. But by ‘double-cutting’, the mill has the ability to produce up to twelve inch by four inch beams.

Peterson mills are world renowned for their simplistic method of double cutting. Where competitor mills require awkward rearranging of mill components to cut a large beam, most models in the Peterson range require only a minor alteration; removing two bolts to detach the sawmill deflector. However, due to the design of the Junior Peterson, simply raising the guard will make that happen with no hassle at all.

Another feature of the Peterson range which is testament to their quality products is the blade design. Peterson have the perfect combination of a thinner kerf along with a solid plate that won’t heat up, wobble or lose tension prematurely. Peterson blades have been known to last over a decade and can be sharpened on the mill in around five minutes.

Peterson’s blade design alone has been a purchasing clincher for those who have operated band saws previously, due to the low running costs and simple sharpening.

All Peterson mills including the JP come with two blades and an electric diamond wheel sharpener with a jig that is pre-set to your blade size. Being that the entire Peterson range are operated with electric start engines, the sharpener can be connected to the engine when needed. 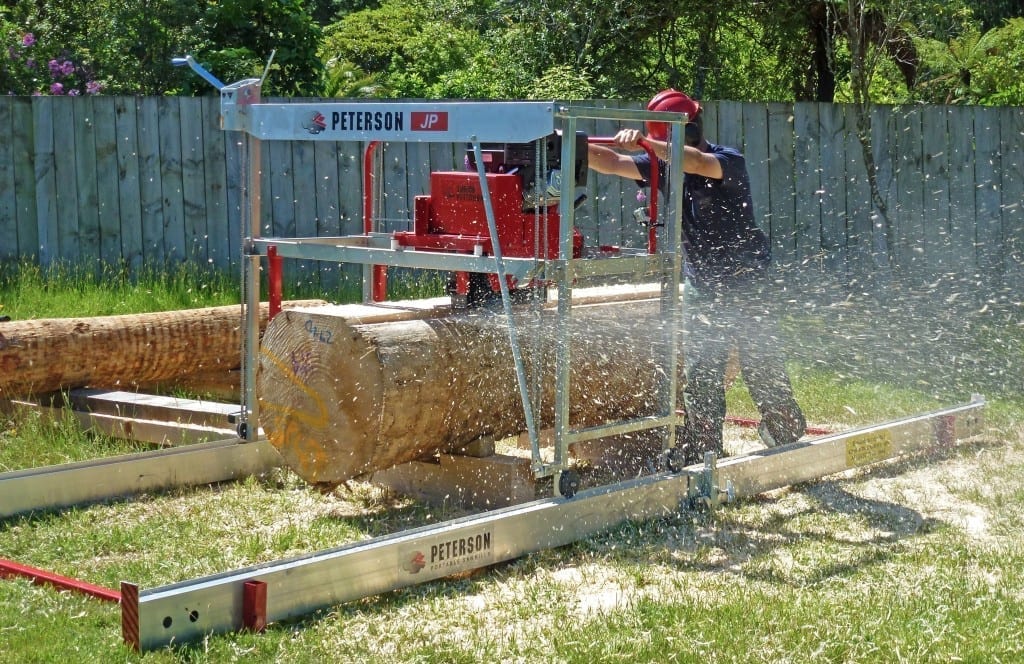 Recently, a competitor mill has come under fire for having ‘sag’ in their beam when cutting thus affecting the accuracy of the finished board. This simply does not happen with the Peterson frame.

Although the JP sits at a lower price point than the rest of the Peterson range, it still features industrial gauge frame extrusions with deeper, thicker wall sections and copyright track die designs. The result is no sag, bounce or wavy timber and all of your horse power is going into the cut rather than being lost in wasted movement.

During a recent demonstration, sawmill specialist Chris Browne cut two by six inch and four by four boards from seasoned Jarrah which really put the Junior Peterson to the test as Jarrah is some of the hardest wood in Australasia. Yet even when tackling this super hard wood, the JP cut true and the boards came off straight every time.

The Junior Peterson is able to produce up to four cubic metres of dimensional lumber per day. That means that with seven days of full time milling, you could cut enough lumber for a small two bedroom home or garage during your trial period, saving you around $15,000 on purchasing rough sawn timber!

While the JP retains all of these signature features that Peterson mills are renowned for, some of the component’s materials have been simplified to lower the price-point making the mill more affordable for part-time millers.

Double cutting with the JP

“This model is the new Peterson Junior, but the word Junior is inappropriate. If you are milling high value lumber, this is the best mill in the world. It far exceeded my expectations as a former owner of a WPF and would be my preference regardless of where I was or what I was doing.”

Ted Isaacs who is based in Oregon, USA was the first Junior Peterson owner in the world and uses the JP for various products on his farm:

“When I saw the Junior Peterson, it was perfect for my needs. I liked the price point and the fact that it was a one-man operation. I am tickled with my mill, especially for the price. It does everything I need!”

Alan Coyle conducted a field test of the Junior Peterson at his milling site in Taupo New Zealand and was pleasantly surprised at the effectiveness of the ‘part-time sawmill’:

“There was an abundance of horsepower and the blade ran true through un-pruned farm logs full of defects. Superb effort from a machine that is truly portable – not just mobile – but able to be set up anywhere that a human can walk.”