Peterson’s Automated Swingblade Mill is a commercial mill, designed for fast and accurate timber production so you can work smarter, not harder. “Market research in the US, Canada, Australia and New Zealand showed there was a gap in the market for a completely automated, swingblade portable and commercial sawmill – one that would be highly portable, productive and wouldn’t break the budget.” says company CEO, Kerris Browne.

The world’s first automated portable swing blade mill built by Peterson’s was released in 2003. After further testing on safety, ease of use, productivity and portability, a re-modelled ASM was launched 12 months later.

The Automated Swingblade Mill is now perfectly suited for those that like the swingblade technology, but are tired of walking up and down on their manual mills all day.  The operator can control the mill without moving from the control panel. The automatic commercial mill can make horizontal and vertical cuts, change the size or depth of the cut, and remove the previous board cut, all at the touch of a button.

Weighing only 70kg more than a manual Peterson mill, the ASM is an automated version of the portable Peterson Winch Production Frame Mill. The automation is handled by a six-button control panel; press two buttons to change the width of the cut and press two others to change the depth of the cut. The drive speed is controlled with a lever which you move forward to go, and pull to bring back. That’s how easy it is to get consistently accurate boards with high production. 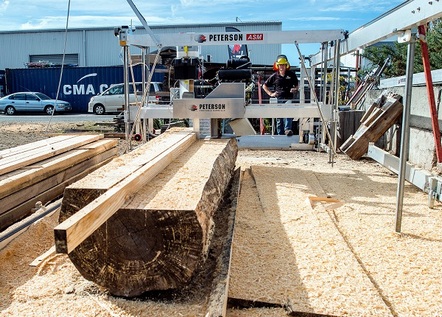 New Zealand ASM owner, Kelvin Williams, agrees with the ease of use and high production. “I cut more timber in one day on my own with the ASM that I do in a day with two people on my manual mill,” he said.

Australian miller Andrew Smith, chose to purchase the Peterson Automated Swingblade Mill from New Zealand after more than 10000 hours using (competitor brand) manual sawmills.  See how easy it is to increase production while sitting down, as shown in this video of Andrew milling hardwood during his on-site ASM training. Andrew now turns out 80 – 85 cross-ties per day without breaking a sweat.

Glenn Marquette is a woodworker and carpenter based in Wisconsin who needs to cut large beams for his renovation work. Peterson mills allow “double-cutting”; two horizontal cuts, using both sides of the blade, to make wide boards or slabs.  Glen loves the ability to double-cut without having to turn the mill around. “Others try to play this down, saying it only takes a few minutes to turn their mill around. But it’s a big deal if you are cutting several beams. You’d be goofing around, every time shutting the mill down, unhooking and turning, reattaching and starting the mill back up.

“I believe in working smarter, not harder!”

Another advantage is the ASM’s board remover that allows easy retrieval of boards from the log. Glenn can cut a board and bring it straight back to him, ready to stack. Or for a two or three-man operation, the board remover also pushes boards out at the tailing end.

If you’re in Australia or New Zealand, contact us to learn more about our special training package.

If you are located outside of these countries, please contact our mill specialists for an obligation-free quote.

Call Toll Free 1800 150 529 or email sales@petersonsawmills.com to learn how you can Work Smarter, Not Harder with an Automated Swingblade Mill package from Peterson Portable Sawmills.