Visitors from the Netherlands


CEO Kerris Browne : It’s been a very wet and cold winter here in Rotorua – the latest freeze even blew in a light snow falling! Should have seen the selfie-overload of backyard snow marvellers on Facebook. Almost rivalled the Pokemon Go flash mobs … 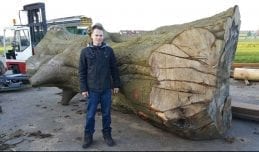 So it was great to have a couple of interesting visitors from Europe to take my mind off the white hysteria. Mark van Zee and his sister Marisca travelled all the way from the Netherlands to visit Petersons. Mark works for a big wood-turning company called Doornekamp Woodspecials (woodturning), located in Waddinxveen, 30 minutes from Rotterdam, The Hague and Utrecht.

Mark is one of seven specialist employees, and features in the company’s Flower Project video on YouTube.

Mark obviously has the official ‘sawdustitis disease’, because he makes his own timber projects after hours. 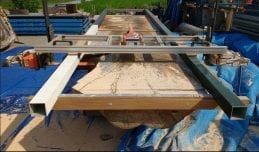 He says live-edge slabs have taken off in the Netherlands, and there’s a real lack of equipment that can handle the older, larger trees.

Mark has put a lot of effort and time into designing a double-chainsaw slabbing system to cut the bigger slabs.

But Mark says it took him a whole day to cut his first two slabs this way!

After speaking to Ezra Newick at Petersons a few times online, and looking at how other Peterson customers are sawing big slabs with ease, Mark was hooked. He decided it was worth the 2000 Euros to travel to New Zealand, and make sure this was the right investment.

Personally, I was very surprised to meet someone so young, ready and keen to invest in his own sawmill. I know that’s rather generalizing on my part – I suppose I’m just used to older guys with sawdust growing on their chests, sitting around telling ‘giant tree’ stories… It was refreshing to chat with Mark and Marisca, with such a positive outlook on life. We discussed everything from furniture making to school teaching, baby cots to refugee issues, and how they differ in the Netherlands and in New Zealand.

Mark and Marisca have now left to see a bit more of our ‘Land of the Long White Cloud’, and a plan to sell some of his Big Beech slabs to pay for a new Peterson Sawmill. The initial plan was to purchase a Dedicated Wide Slabber to make the most of the live-edge slab market in the Netherlands, but since his hands-on chat with Ezra about the versatility of the swingblade models … perhaps he ‘needs’ a Winch Production Frame with a clip-on slabber accessory.

We’ll be keeping in touch with Mark van Zee from the Netherlands : a woodcraftsman to watch.