Bill Iverson has lived and breathed in the fresh Alaskan air all his life, and his favorite pastimes of fishing and hunting make the isolated American state a perfect playground for him. Thanks to his Peterson Portable Sawmill, his mother-in-law can now also enjoy the spectacular view over the Kenai River and surrounding mountains from the deck of the new apartment that he built with timber straight off his mill. 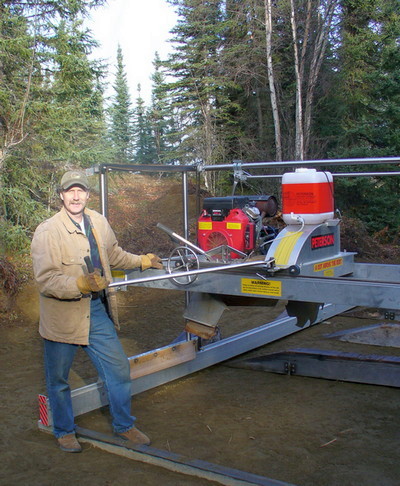 Based in Soldotna, Bill comes from a long line of carpenters, but it wasn’t until later in life that the wood bug finally caught him. It was while he was helping his then 70-year-old father to strip and build a log add-on to his existing cabin, where they were using three-sided logs pinned together with 10in. pieces of rebar. He thought that it worked pretty great – so much so that he was inspired to take a good look at portable sawmills so he could start working on his own garage.

He spent his time researching the different companies that manufactured portable sawmills, as well as talking to other mill owners and reading trade magazines. It was from the latter that he learned about flipsaws, or swingblade mills, and one company in particular – Peterson Portable Sawmills.

“The bandsaw millers I talked to all complained about one thing – constantly having to replace saw blades. It was something that I wanted to avoid and the circular blade of the swing mill seemed to be the perfect solution.”

The circular blade is easily sharpened on the mill in a few minutes, and you only need one or two blades in reserve – in case you hit metal – compared to the many that bandsaw mill owners require.The other thing bandsaw millers complained about was wavy boards coming off their mills. “I’ve been running my Peterson for five years now and I’ve never seen a wavy board,” Bill says. “I’m very happy with my choice.”

“Peterson just always seemed to come out on top”

Bill’s choice was the 10″ Winch Production Frame, with the benefits of a single raising lever, as opposed to the multiple levers that Bill had seen – and not liked – on others. He is now able to make furniture, picnic tables, wishing wells and other unusual projects but it was the building of his own workshop though that he is most proud of. 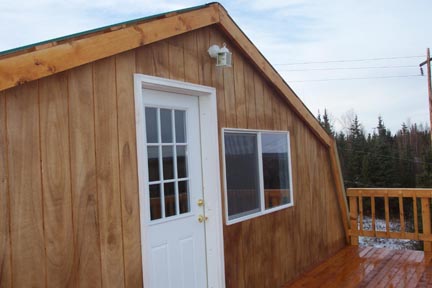 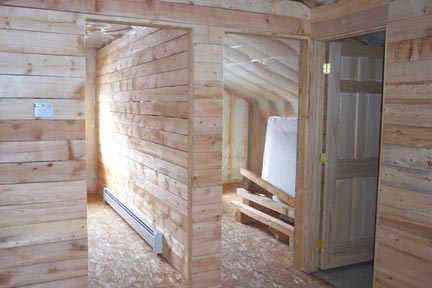 Bill and his wife Pam, made a sketch that he says looked like a five year old had drawn, but it gave them a goal. Making the most of the many trees that had been killed by the spruce beetle epidemic, Bill spent the next three years cutting them down, then hauling in the logs and cutting them down to size on the Peterson mill. Pam would then peel, power plane and sand them, then move the logs over to the garage site. They started putting them on the walls, and every three or four feet pin them with 3/8in., 10in. long pieces of rebar.

They worked when they felt like it, and rested when they didn’t, but were soon building six foot scaffolding to continue up. “We would slide the 15-20 foot log onto the scaffolding, climb up onto it ourselves, and then put the next log on. At 11.5 feet high it was really fun lifting those logs up,” Bill comments wryly.

Bill and Pam put them all on by hand without winches or booms, but got a friend in with a boom truck to lift eight large 26 foot long logs onto the walls to support the upstairs apartment. Bill added a center beam across them and on the wall, then had the local truss maker custom build a number of barn-style trusses and put them on top of it all. They could then add a metal roof and continue working out of the harsh rain and snow.

It took another 12 months to finish and furnish the insides. “And I now have a great 24ft x40ft shop,” says Bill. 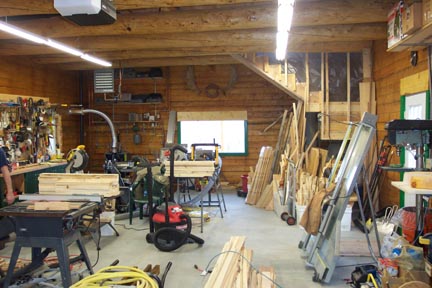 “We finished the apartment with tongue and groove pine on the walls and ceiling and used Pergo on the floors. It has two bedrooms, living room, kitchen, and bathroom, and the large deck overseeing the Kenai River.”