Light earth building: A natural way to build the future

Like many other countries in the world, New Zealand has a huge housing problem. While successive governments have been trying to tackle this housing crisis, various individuals and community groups have been working on their own creative solutions.

One of those people is Grant Steven, a tutor at the Regional Learning Centre of the Eastern Institute of Technology (EIT) in Ruatoria (East Cape, New Zealand): “Building a house is not as hard as it is made out to be, and it sure doesn’t have to be expensive. Local, natural building materials can be found anywhere and are mostly free. And you don’t have to be a highly skilled tradesman, as long as there are one or two people with experience in building who are supervising the building project.”

Grant has been teaching natural and light earth building techniques for many years and has a background in growing kiwifruit and working in orchards. 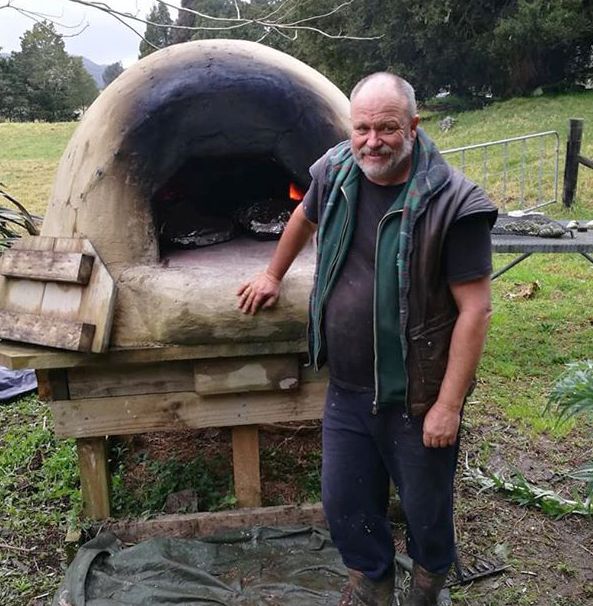 He started out giving courses in horticulture and doing workshops on how to build an umu, which is a type of wood-fired earthen pizza oven or chiminea. It proved an instant hit, and many people asked Grant to build together with them. From building these clay ovens it was “just a small step up” to building clay huts and houses. Since then, Grant has been pioneering the use of light earth building in New Zealand, adapting overseas practices to local conditions and availability of materials.

“I’ve always been interested in adobe structures and building with earth;

people have been building with dirt since prehistoric times” 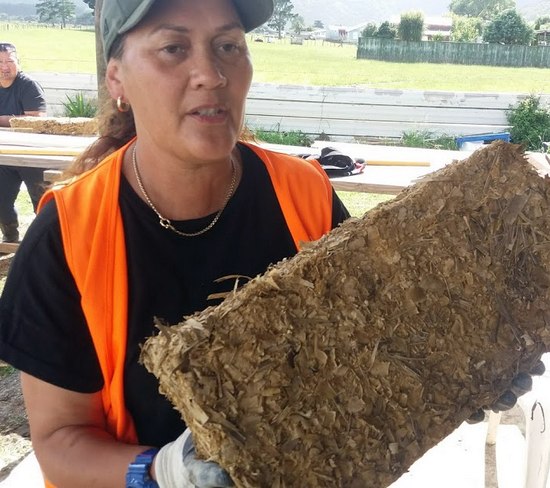 “I’ve always been interested in adobe structures and building with earth; people have been building with dirt since prehistoric times. Because it’s hard to find suitable clay to use for light earth building, we mix natural fibres such as hay, straw and wood shavings with the clay slurry. When properly prepared and applied, light earth buildings exceed the New Zealand building code standards in terms of warmth, strength and durability.”

The light earth building movement in New Zealand used to be quite elitist, people on low incomes did not know about light earth building practices. Several initiatives throughout the country to stimulate the construction of cheap natural buildings to house people had limited success. As soon as the government subsidies dried up, building work would simply screech to a halt. The only people who benefitted from the subsidies were resident German and American millionaires and their high flying architects, who would design light earth buildings that would cost upwards of a million New Zealand dollars. Typically, people who have commissioned these homes have been green-leaning early adopters or simply rich folk who wanted something few others have. 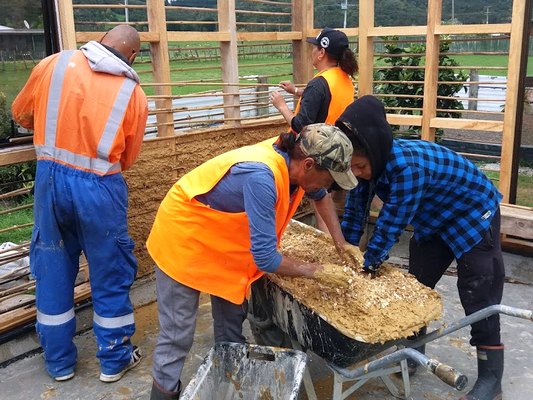 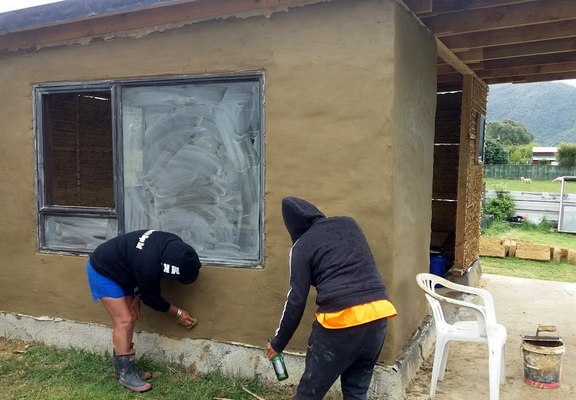 The population of East Cape consists of 90% Māori. The Māori people are the indigenous Polynesian people of mainland New Zealand. Māori originated with settlers from eastern Polynesia, who arrived in New Zealand in several waves of waka (canoe) voyages between roughly 1320 and 1350. Over several centuries in isolation, these settlers developed their own distinctive culture, whose language, mythology, crafts and performing arts evolved independently from those of other eastern Polynesian cultures.

Māori on average have fewer assets than the rest of the population and run greater risks of many negative economic and social outcomes. Grant: “The East Cape is a very hard place to live, there’s a lot of unemployment and poverty. On top of that, there is a severe housing crisis on the East Coast, with lots of people living in derelict houses and caravans.”

A healthy, affordable and accessible housing solution was sorely needed. Building supplies are proving to be unaffordable, but the family-owned pine forests offer an almost unlimited resource of lumber. “Homeownership is out of reach for many of our whānau (family and friends),” says Alice, a student at EIT. “The popular light earth building courses have given us hope that we can build affordable accommodation for ourselves by utilising plentiful natural resources from the land.”

In 2017, a trial light earth house was constructed with framing material sourced from trees around Ruatoria. Other free, local materials that were used include bamboo, pampas grass, raupo (bulrush), manuka brush, wood shavings, river sand and clay sourced from stream beds or paddocks. 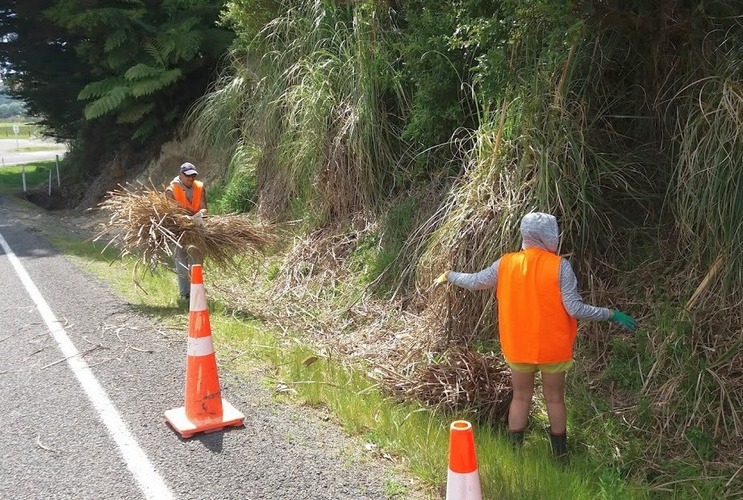 “The land supplies us with clay for bricks, timber for structure and plants such as flax and raupo for insulation – not to mention access to lots of cow poo! We’re working with traditional building methods, by using sawn-to-measure timber frames we’re doing it in a new, modern way.” 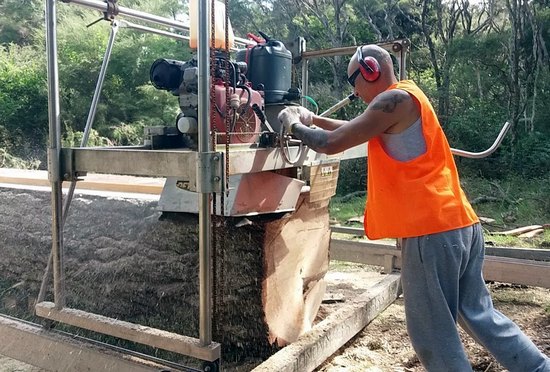 The timber for the frames is cut with Grant’s 22-year-old Winch Production Frame (WPF). The WPF was designed for productive sawmilling, cutting high quality, and extremely accurate timber with portable or fixed-site milling. It is great for contractors and built from top quality materials for durability in any weather.

Grant lives not far from the New Zealand manufacturer of the Mahoe range of mills. “The Mahoe mills are too big and heavy for me. I move around a lot and the Peterson is truly portable and easy to operate. The mill is quick to set up and break down, light and easy to carry around and operate, yet stable and safe. Maintenance costs are low, it’s perfect for me.”

Building with earth has many advantages. One can use 100% natural, local resources, meaning the carbon footprint will be very low. Houses built from natural materials offer great indoor climatic, moisture and noise control. The walls are fire resistant and have a detoxifying effect. They are very affordable and have a low life cycle cost. Last but not least the colours and textures are beautiful to look at.

“By using conventional timber framing as the basis, this allows people with a conventional building background to get into light earth building. It is a fast process. It takes a few days to put up a post-and-beam frame, which is then in-filled with natural fibre. Because the clay mix seals in the timber, it protects it from rot and insects. Buildings should stand 100 or even 200 years if done well.”

Grant has also been using his Peterson mill as a teaching tool. Although students are not allowed near the sawmill during course hours, after receiving adequate training from Grant, many of them love to run it outside student hours and on weekends. “Students love milling, especially men. They will help me with my other milling jobs for a box of beer, that’s how much they’re enjoying running the mill.”

Although he initially disliked using Facebook, his whānau (family and friends) encouraged him to share his light earth building endeavours with the world. Grant started to publish Facebook posts and soon after, things just snowballed with huge apparent interest in his projects from all over New Zealand and further afield.

As a result of this online publicity, Grant is now being asked to teach, manage and build all over the country. He has now helped build a handful of light earth houses in East Cape and several more elsewhere in New Zealand. 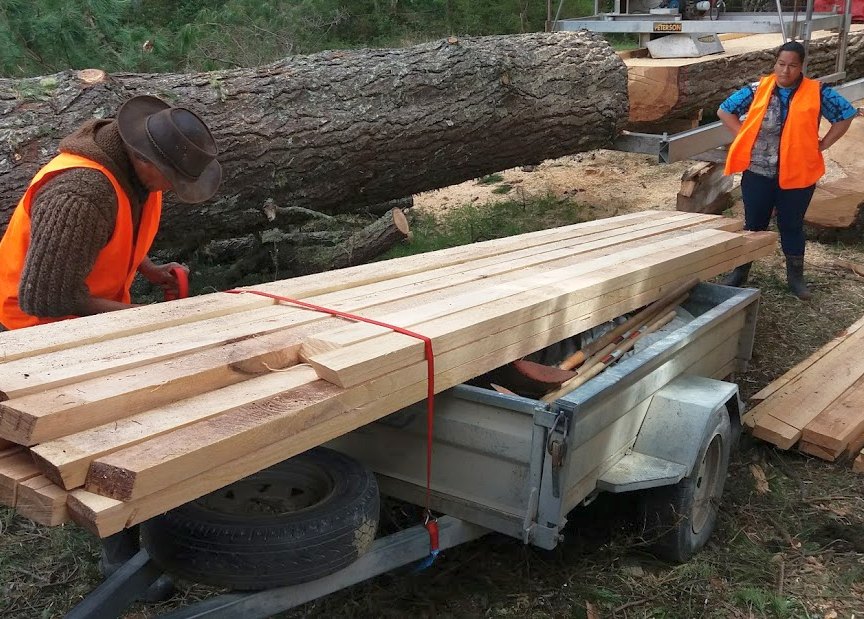 Grant is advocating the Community Light Earth Building yard initiative. “It’s expensive for an individual having to purchase all machinery for building houses. It’s far better to spread that cost among a community and give people access to those tools in a shared yard.” One such community initiative recently purchased a Winch Production Frame sawmill to be operated in Ruatoria.

Grant is representing a growing, worldwide movement in light earth building. By applying traditional building methods in a new way, he is helping disadvantaged communities to stand on their own feet.