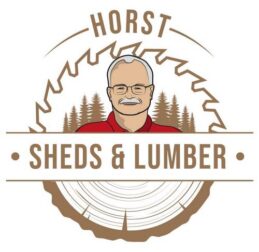 Horst has been with Petersons since purchasing his Junior Peterson at the beginning of 2021. Below is an excerpt from one of our Owner’s Stories written about Horst detailing a bit about his background, his journey from Austria to Canada and his new found passion for the portable sawmilling and construction industry.
We love having Horst in the Peterson family and strongly recommend if you’re considering a portable sawmill purchase whether you’re in the area or further afield, make the time to visit Horst for a demonstration.

Horst Puff had been managing a BP gas station on an Austrian Autobahn for some time when in 2009, he got itchy feet. He and his partner Ulrike first moved to Calgary in Alberta, Canada before ending up settling in Nova Scotia, a sizeable peninsula on Canada’s East coast.

His current job as a full-time owner-operator long-haul trucker, takes him across the USA and Canada, transporting a wide variety of goods, from live lobsters to peat moss to Christmas trees. Horst works five to eight days and then has five days off, which he likes to spend working on all kinds of wood-related projects.

Horst muses: “I love living in Nova Scotia. We swim in Ponhook Lake from June to October, and I really get to use my handyman skills here.”

Locals told Horst that on Nova Scotia you could live in a small house, but that you needed to build many sheds for firewood and storage, an idea which he quickly adapted. 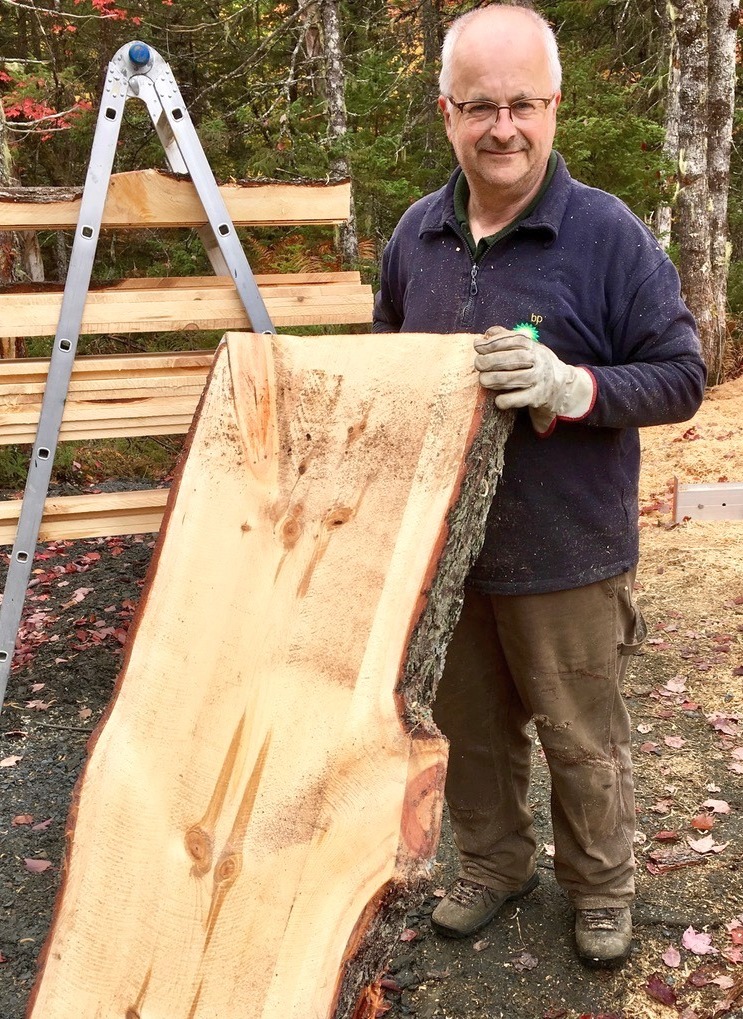 “My father was an Austrian timber framer, therefore woodskills run in my blood. I only work with natural, untreated wood and dislike the glued particle boards which are so common here.”

When the local lumber yard shut down, this meant Horst had to drive 25 miles (40 kms) to get lumber. He realised that the multitude of trees on his 6 acre (2.5 hectares) piece of land could provide him with wood cut to any size, not just firewood.

“I started clearing pine, maple, ash and oak trees and processing them with a Logosol chainsaw sawmill. It did the job but wasn’t a very efficient way of working for me.” 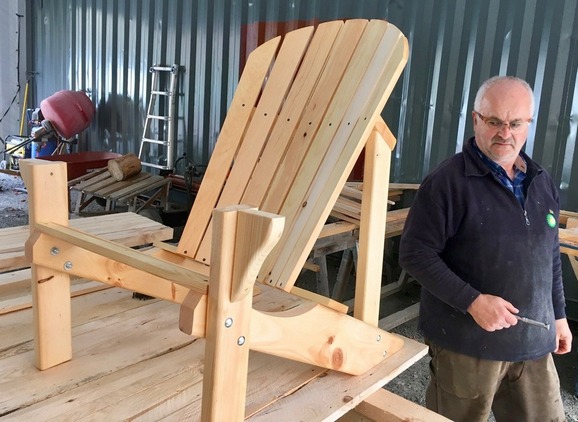 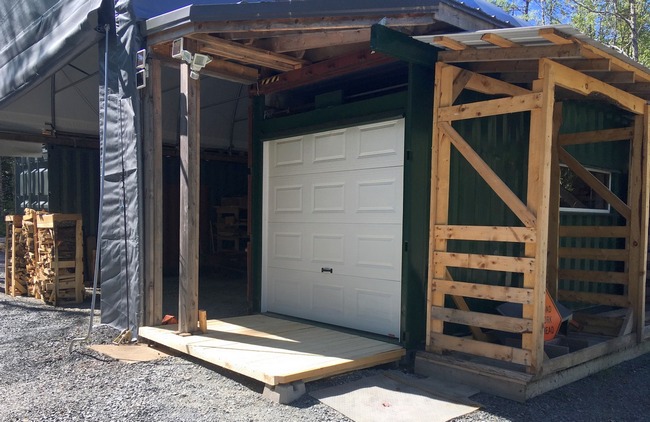 Horst researched and investigated the intricacies of the “orange-colored machine, the red one, the green one”, and of various other bandsaws. Horst explains: “I did my homework and compared them all. I investigated band saws but was not really happy with the heavy log handling and sharpening process. I watched at least 50 videos on YouTube – but was not convinced at all.”

“I investigated band saws but was not really happy with

He watched a Peterson video of a portable sawmill in operation and contacted Canadian Peterson owner, Robin Pellett to arrange a demonstration. 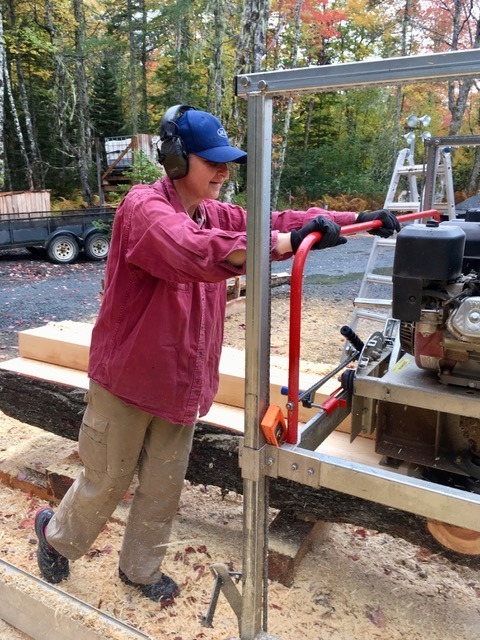 “Robin is a wood worker as well as an experienced Peterson Sawmill operator and showed me a very impressive demonstration of his Winch Production Frame mill. Initially I was in doubt whether I should purchase a sawmill that came from the other side of the world because I was worried about having easy access to spare parts. I also wondered whether I should be purchasing a Canadian or American brand.”

What proved to be the deciding factor for Horst, was the standard of manufacturing of the Peterson range, which he likens to German and Austrian engineering quality: “I like the finish of the surfaces, there are no sharp edges, the welding seams look good, the chains are stainless steel. It’s by no means a sloppily manufactured machine.”

Since he bought his Junior Peterson (JP), Horst has been using it for a wide variety of projects, both great and small. Manufactured from mild steel, the JP is the perfect swingblade sawmill designed for part time sawmilling. With the JP you can even produce one full width slab from every log you cut! Horst is now considering purchasing Peterson’s planer blade and sanding kit, which are the perfect accessories for dressing wide beams and slabs.

Horst has already had great return on investment from his JP, having built several drying sheds for lumber and firewood, a boat house, traditional patio chairs, and a couple of wooden Christmas trees. Not wanting to waste a nice piece of firewood, Horst once tried making a cutting board and was so impressed with the result that he ended up making 15 of them. Stamped with his own logo, they make a unique gift for Austrian friends and family. 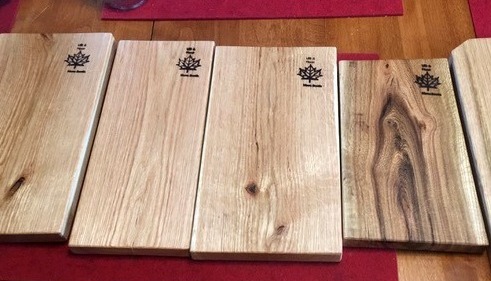 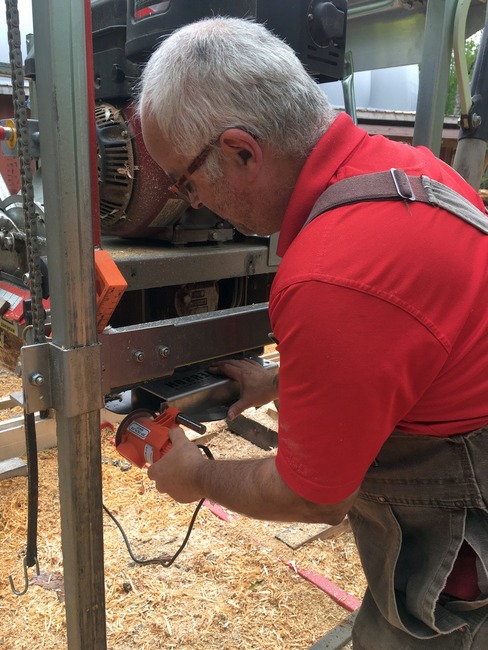 “I’m a hobby sawmiller, so for me, the JP is a good budget choice. Just like with the more expensive models, I get to enjoy the benefits of operating a swingblade, such as a 20% higher production rate compared with a bandsaw. I can cut any size boards and convert more wood into useful lumber. I can sharpen the blade in three minutes whereas with a bandsaw, it would take 10 minutes just to take the blade off!”

“My father was an Austrian timber framer, therefore woodskills run in my blood”

Horst is proud to have followed his dreams and settle in a country that he loves. To share his new knowledge and passion of portable swingblade sawmilling, Horst invites any fellow or aspiring miller to visit him for a demonstration. Use the contact details below to get in touch with Horst.

A lot has happened since we last spoke with Horst. He sold his truck and is now solely focusing on making a living with wood: “You could call me a wood worm, just like my dad was. Once word got out about what I do, demand just snowballed.”

Halifax, the capital of Nova Scotia, is about 150 kms away. In contrast, the area where Horst lives is sparsely populated and dotted with lakes and holiday homes. Earlier this year, Horst decided to test the water by putting up a Facebook post advertising his milling services. Within days he had received two or three orders, and enquiries have been coming in ever since.

His business consists of four pillars: 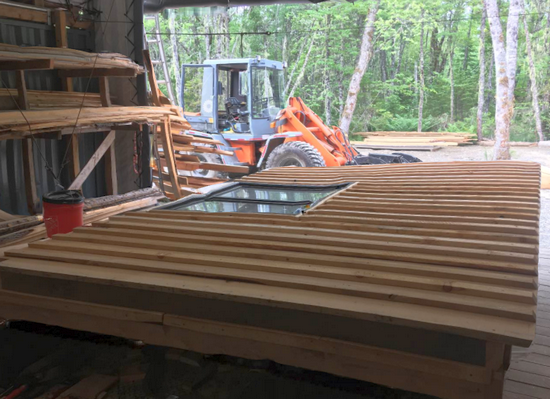 Horst elaborates: “The situation around Covid-19 has definitely fast-forwarded demand. The local lumber yards have basically sold out of lumber, so people are looking at other ways to get wood for their projects.”

Being the Peterson Area Rep for Nova Scotia suits Horst really well and has put him in a great position: “I love working with my Peterson, it doesn’t take long to recognise quality. Demand from people with holiday homes for the customised sheds has skyrocketed, I’m booked up till the end of the year!”

If you are living in the area, feel free to contact Horst for a sawmill demonstration, or if you have any sawmill related job at all. He usually has a new JP in stock for sale.