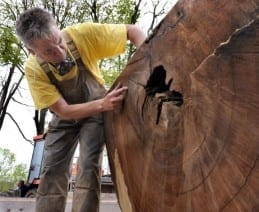 The tree, which Hoover estimated to be more than 200 years old, based on its rings, was cut down after the freak October snowstorm that snapped branches like toothpicks throughout the region.

Michael Halas Sr. said the tree, which was more than 6 feet in diameter at its base, was located on the property of a friend who lives in New Fairfield.

“It was so badly damaged that, for safety reasons, it had to come down,” Halas said. 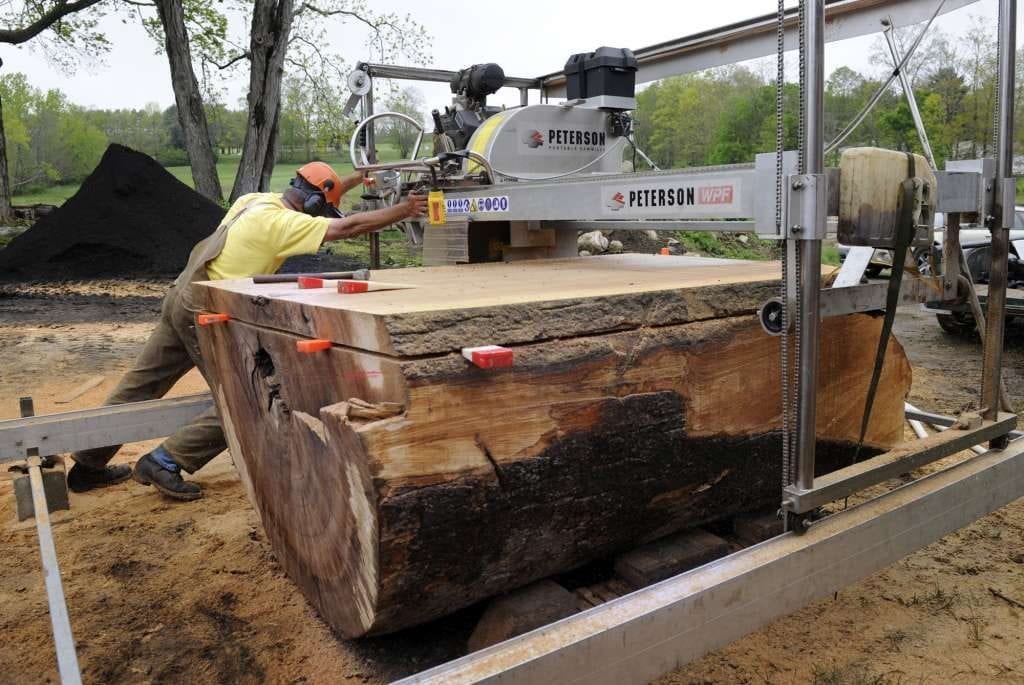 His longtime friend and former Danbury High School football coach, Gus Edwards, said he wanted to have the logs sawed into slabs for his seven grandchildren, several of whom are budding woodworkers. Edwards said he urged Halas for months to help him with the project.

“This is a very unique opportunity,” said Halas, while Hoover sliced through another slab of the tree’s trunk like a master chef slicing through a block of aged cheddar. “It’s not every day you see something like this.”

A master sawyer cut more than a dozen slabs from a sycamore tree damaged during last October’s snowstorm. The once stately tree was more than 6 feet in diameter at its base. The sycamore is one of the more sought-after species by woodworkers for quartersawn planks.

Edwards said “it took me months of research” to find a sawyer with the knowledge and equipment needed for the job.

“This was a beautiful tree and these are some beautiful slabs,” Edwards said. “It’s a way of preserving history. A chance like this comes along once in a lifetime.”

Hoover, who traveled to the city from Mystic with a Peterson Portable Sawmill, said that while sycamore is not commonly found in most lumber yards, it is one of the more sought-after species for quartersawn planks.

A tree is quartersawn, he explained, when slabs are cut at a 90-degree angle from the rings, revealing the pattern that exists within the grain of the wood.

The portable sawmill Hoover brought to the job has a vertical blade on tracks, and is capable of cutting slabs up to 5 feet in diameter.

“This saw is typically used when you have trunks that are either so large or so remote that you can’t bring them to the sawmill,” said Hoover, the owner of Terrific Timbers LLC. “The Peterson can be put into place around the trunk that you want to cut.”

Edwards, an Army veteran who coached football at Danbury High for more than 25 years, said he plans on selling one of the slabs, “ASAP,” to raise money for Mike Halas Jr. to purchase a German Shepherd.

Halas Sr. said the family had two loving dogs that died in recent years. Allie, a German Shepherd who was more than 12 years old, died several months ago.

“This wouldn’t have happened today if it wasn’t for Gus,” Halas Sr. said. “When he gets an idea in his mind, there’s no stopping him.”