Timbersports competitor and sawmiller, living life to the full 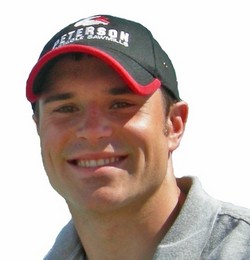 When he isn’t a timbersports competitor at events with his wife, running his business, training new mill owners, spending time with family, or helping out a friend, you can find Nathan Waterfield either 10 feet up a tree chopping, or milling lumber with his Peterson WPF sawmill.

An arborist by trade Nathan brings new meaning to the term ‘living life to the full’. At the age of 29, Nathan has worked incredibly hard to establish himself as an American lumberjack, business owner, builder, family-man, timbersports competitor and as an all-round good guy. He has done what most people hope to achieve in a lifetime and demonstrates through his story that life truly is for living.

Nathan was born and raised in Warren, Pennsylvania and grew up with one older brother. From a very young age he was an active sportsman who played American Football, wrestling, track and field, and he also enjoyed hunting and being outdoors.

In his teens Nathan spent a lot of time with his grandparents, and he worked on a farm for four years during high school.

At age 14 Nathan’s grandfather Lee Rubright who was a linesman for a telephone company at the time, and did tree work on the weekends, taught him how to tree climb and Nathan has been climbing ever since.

After completing high school in 2002, Nathan moved to New York to study forestry.  He earned an Associate’s Degree in Forest Technology and a Bachelor’s Degree in Forest Resource Management at the State University of New York’s (SUNY) Ranger School and College of Environmental Science and Forestry, respectively. 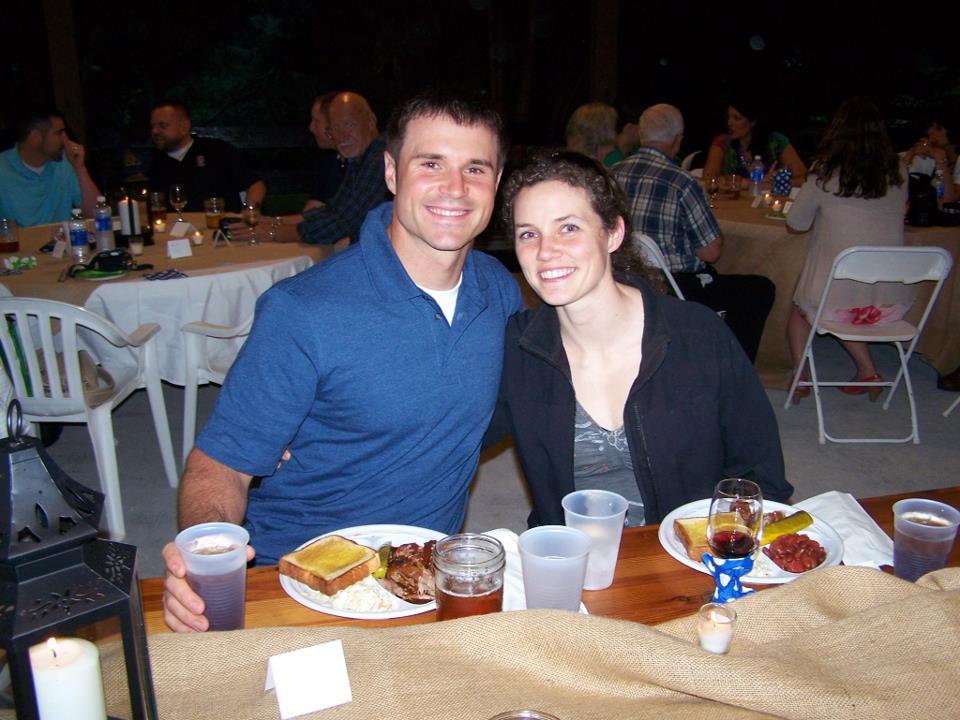 It was there that Nathan had two life-changing encounters which have dramatically molded his life: he discovered timbersports and met his future-wife.

“I had heard that other colleges were competing in woodsmen events so we started a team.  After going to a competition, I found it to be a lot of fun and instantly became addicted”.

During his first year as a timbersports competitor in 2003 while at a small college competition, Nathan met the love of his life Holly.  Holly started competing in timbersports in 2001, soon working her way from collegiate level to professional shows. She introduced Nathan to the professional side of timbersports, and they often compete side by side in many ‘Jack and Jill style’ lumberjack events.

Nathan’s strongest area within his sport is chopping. He holds records in the Springboard chop and is a 3-time winner of the US Title Springboard.  He is a serious contender at the STIHL Pro Timbersports series and one of the USA’s top 10 axe men.

In late 2006 after graduating and proposing to Holly, he travelled to Spain representing the USA in a series of competitions.

He went on to compete in shows in Australia and New Zealand. It was during his trip to New Zealand while training and competing in shows that he came across a Peterson Portable Sawmill at the annual Fieldays showcase in Hamilton, which created a lasting impression on him.

Peterson’s swingblade mills use one circular blade, which pivots from the horizontal to the vertical position to cleanly cut one board at a time. The mills can be set up over a fallen log in the forest, or fixed in a stationary position in a lumberyard.

Fascinated by the design of the mill and passionate about working with trees and lumber from a young age, Nathan contacted the team at Peterson’s, and acquired a Peterson Winch Production Frame (WPF) sawmill. 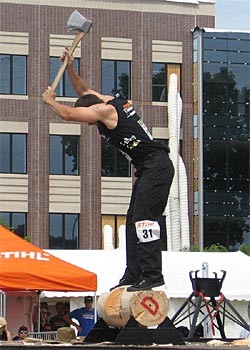 The WPF is designed for fast production of high quality and extremely accurate timber. The fixed track method allows easy access to the log, and sawn timber is easily removed.

Nathan founded his business Timberworks Tree and Stone in July of 2007, just before he and Holly were married, and got the WPF the following June.

Owing to the versatility of the WPF, Nathan has milled from more than 20 tree species in numerous locations. Using the wide slabber and weatherboard attachments Nathan is able to market products not offered by ordinary sawmills.  He commonly saws oak, white pine and Norway spruce to produce a wide variety of items, from dimensional lumber to custom wide slabs and artistic furniture. Nathan says “anytime I need something, I can make it myself right on a whim. Most people don’t realize the variety of lumber the Peterson WPF can produce. 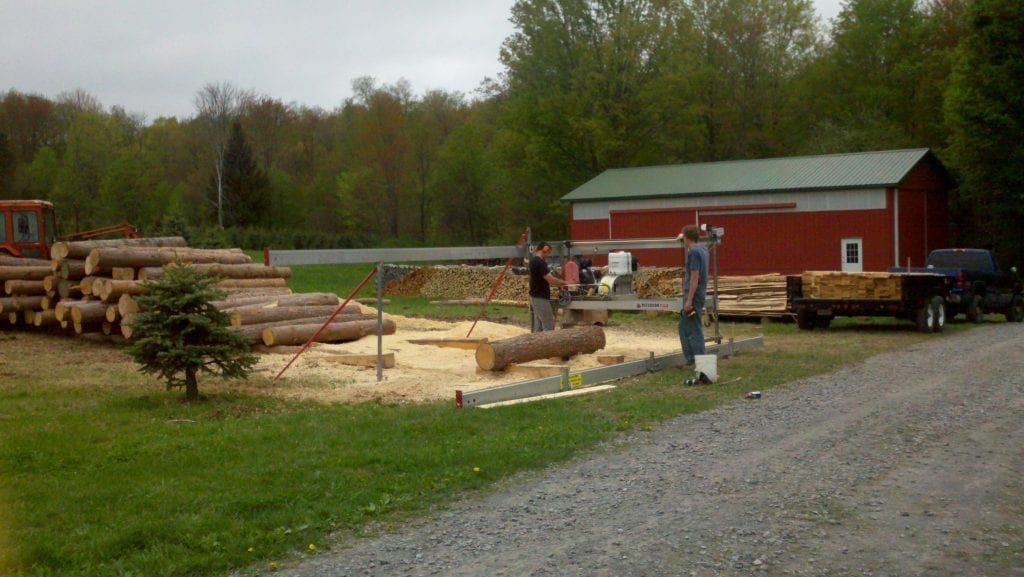 Nathan’s favorite feature of the WPF is the push button electric winch. “I can make vertical adjustments on the fly without leaving the controls and it saves time that would otherwise be spent walking around the mill to raise and lower the tracks; it’s just so easy”.

The portability of the mill means that it can be transported and set up quickly, or can be left on site depending on the client, which works well for Nathan who does tree work in the winter, and logging and climbing all year round.

Wood chopping competitions are occasionally held at events that showcase Forest Products Equipment; Nathan has held a number of demonstrations with his Peterson 10” 27hp Winch Production Frame (WPF) while also appearing as a timbersports competitor.

In 2010, Nathan and Holly rallied the help of family and friends and undertook the biggest project of Nathan’s career to date: the build of their two-story family home.

“We bought the land a few years ago and it has been a three year building process roughly. In the first year we laid down the foundation, in the second year we did all the structural work (framing, beams and posts), and the third year we enclosed the walls”. 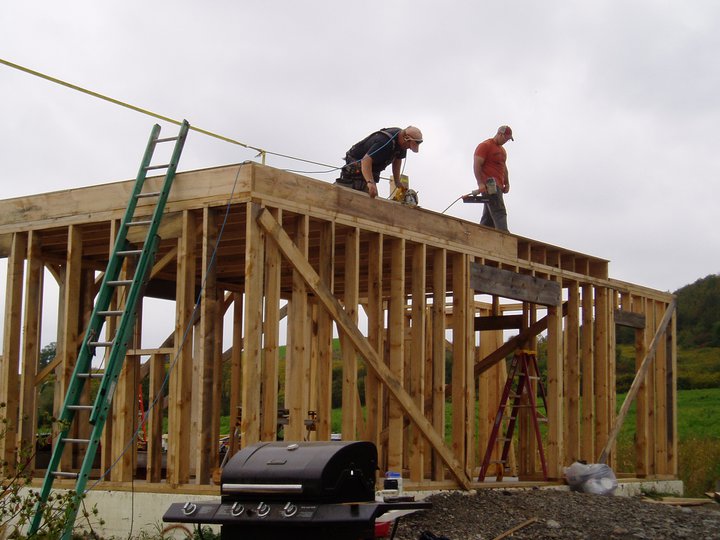 Using a variety of residential and salvaged trees, Nathan milled all of the timbers for the post-and-beam frame, all of the pine roofers, and more than half of the wall boards and flooring using his 10” WPF mill, purchasing a small amount of framing lumber, wall boards, and flooring. Common timber dimensions used to construct the frame were 4”x6”, 8”x8”, and 10”x10”. Some of the largest timbers, 8”x10” and 19ft 6 inches long, were used as rafters in the roof trusses. One carrying beam in particular showcases the Peterson WPF’s versatility, measuring 8”x16” and spanning 16 feet to create a spacious open kitchen.

“A friend showed me how to best create the mortise and tenon joints, and which chisels to use; and I had three books to use for reference”.

For the layout design of the timber framing Nathan needed true timbers for the layout to be successful. “All timbers came out true with the Peterson which made the layout so much easier. There was a section in one of the books which taught how to compensate for errors in the lumber but I never had to use this and it gave me pride in working with the Peterson”.

When it came time to finish the flooring for the house, Nathan didn’t have enough dry lumber nor a kiln to dry it in, so he bought some milled black cherry from large commercial sawmill. “I couldn’t believe how inconsistent and untrue the boards were”. There was a lot of variance in the wood and so there was a lot of wastage and time spent trying to turn the cherry into suitable boards to use for the flooring. The quality of the commercially-milled cherry was very low compared to the lumber I produced using the Peterson”.

While managing his business, and building the house, Nathan and Holly were delighted with the arrival of their daughter Cora in 2012 who can now point out a knot when she notices one on the boards of their new timber home.

Once the main internal components of the house were completed, they moved into their beautiful new home. There are some minor touches which still need to be done but they love their new home. “When I get the opportunity to relax and look around at the house, it is extremely rewarding to be able to enjoy it. I am very proud of what my wife and I have accomplished”.

Nathan’s next milling project includes felling some trees on a client’s land block property. The trees will then be milled onsite into beams and posts, and these will be used to build a large timber frame barn.

He and Holly recently competed in the Hayward lumberjack world championships, which they enjoyed getting involved in after the house-build and arrival of their daughter. 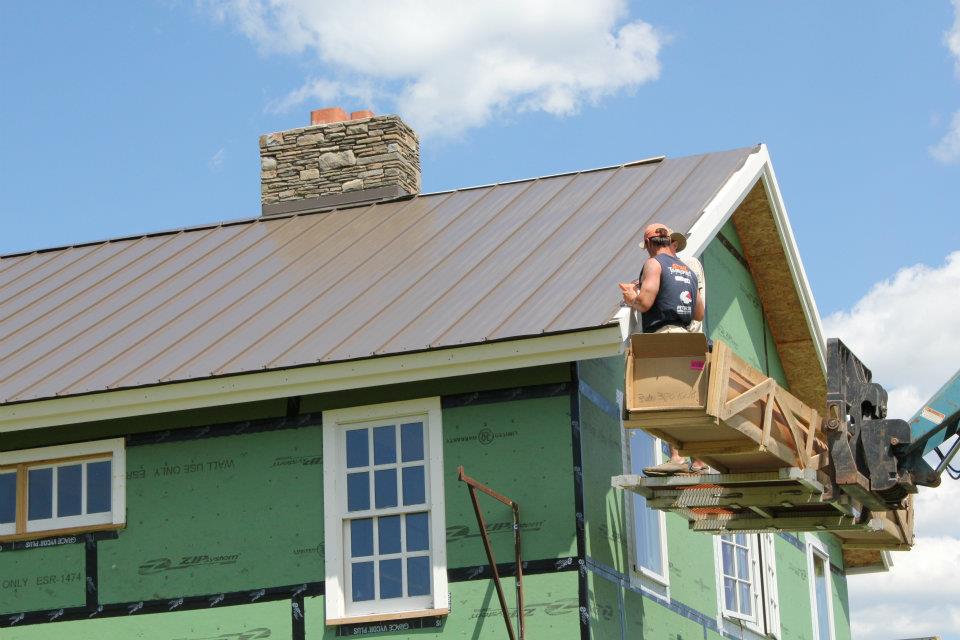 Nathan recently sold his 27hp WPF mill and has also been helping to train the new owner. He is excitedly awaiting the arrival of the upgraded 35hp WPF Peterson mill.

Since selling his 27hp, Nathan has been using the new 6” Junior Peterson mill. When asked his thoughts about it he said “it is really a lot of fun to use. I am used to running the 10” WPF which takes some effort to operate; the JP pushes and runs so smooth.  The angle clapboard attachment setting is very useful and you don’t have to make any changes as the clapboard setting is already attached, which saves a lot of time”. “Traditionally with a clapboard attachment it takes several cuts to get your settings correct, but the JP made it so easy”.

When asked what his plans are for his future, Nathan has no plans to retire as a timbersports competitor or slow down yet, and he hopes to remain independent doing what he loves and to provide for his family.